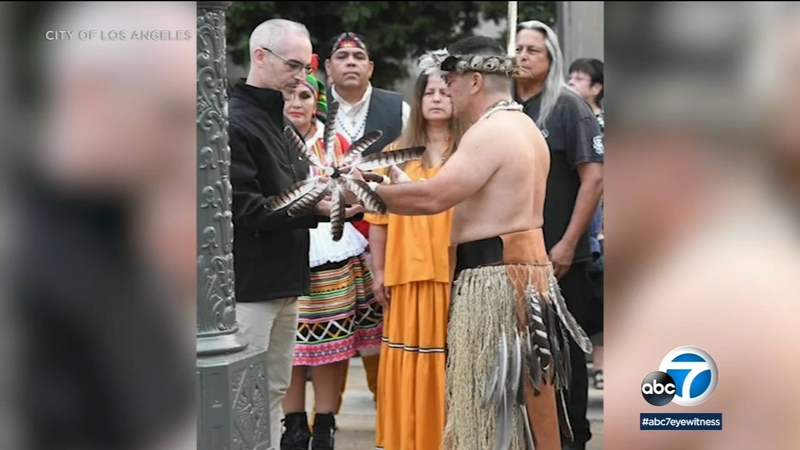 Raised in Oklahoma, O'Farrell is the first and so far only Los Angeles city council member of Native American ancestry.

He says his past guides what he does every day.

"It's something that I was raised with and it's part of my DNA," says O'Farrell. "Being a tribal member took on whole new profound importance."

On his mother's side of the family in Oklahoma, his great, great grandfather is part of the history of the Wyandotte nation. His grandfather was the chief in the 1940s and '70s.

O'Farrell says "We were all very aware and very proud of our Native American heritage. In fact my Irish-American father was as proud as anyone that we were Indian kids."

He says it's a deep and personal responsibility.

That's why when he became a councilmember he wanted the ceremony at the Los Angeles River, which was vital to the native people in Southern California. He was sworn in by Chief Billy Friend from Oklahoma.

"The common bond that we have is that we are all of indigenous ancestry," says O'Farrell.

It was back in 2014 that O'Farrell started thinking about changing the way the city celebrated Columbus Day. He says for decades Native Americans were simply erased from history.

"From the late 1800s through the (1930s) '40s and '50s until the Native American Indian movement, Indian Americans were really powerless."

The city council voted to eliminate Columbus Day and replace it with Indigenous Peoples day.
"It was still highly dramatic when it came to the vote," he says.

For some in the Italian-American community this was exactly what Native Americans had objected to for years, replacing one group's social inclusiveness for the sake of another.

O'Farrell says it was not intended to exclude anyone.

"It's really coming to terms with our history and acknowledging for what it is through that we can really have something to celebrate. We can celebrate first peoples who made it possible for all of us even myself to be here and live the American dream," he says.

O'Farrell feels now the government should go a step further and apologize to Native Americans for what was done to them in the past.

"There is an emotional and spiritual healing to that now Native America symbolism is really important so I'm a big believer in gestures but it's even more important to follow up with actions and I think an apology is really necessary."