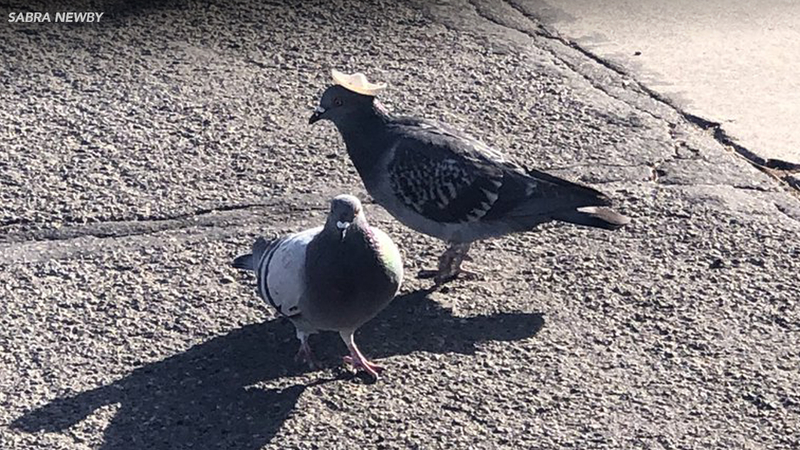 "While quirky or fun, it's still inhumane," City Manager Sabra Newby, who posted the photo on her Twitter page, said in a statement to ABC Reno affiliate KOLO. "The birds suffered when this exact thing happened last year in Las Vegas. One of them recently died. We don't want copycats."

"Washoe County Animal Services said this is the first known instance of something like this in the area," KOLO reported.

As of now, animal services have asked the public's help to track down the pigeon and prompted residents to call dispatch if the bird is spotted again.

Shyanne Schull, director of Washoe County Regional Animal Services, said in a statement to ABC News that while their department "focuses on the well-being of domestic animals in our region, we are monitoring the current situation with the recent report of a hat on a local pigeon,"

"Washoe County Regional Animal Services finds this practice of affixing any objects on wild birds disturbing, inhumane and strongly discourages this type of behavior," Schull continued. "Should the community see this take place or have tips on who might be conducting this behavior, please call 775-322-3647 or 3-1-1 and we will investigate and work with appropriate authorities."

Newby, who did not immediately respond to ABC News' request for comment, also asked others to notify animal control if they see the hat-wearing bird.

A couple months back, a similar situation surfaced over 400 miles away in Las Vegas.

The video that was first shared on Twitter went viral but quickly sparked concerns over the birds' well being.

On Sunday, the Facebook group Lofty Hopes shared an update that one of the cowboy pigeons from Las Vegas has died.

It is unclear if the incidents are related or who is behind them.
Report a correction or typo
Related topics:
pets & animalsnevadaanimal abusesocietybirdsu.s. & world
Copyright © 2021 ABC News Internet Ventures.
More Videos
From CNN Newsource affiliates
TOP STORIES