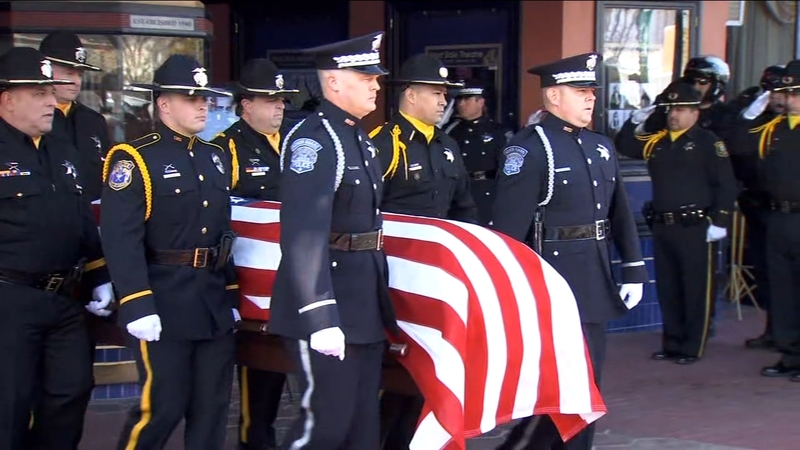 NEWMAN, Calif. -- A somber morning for the city of Newman.

Flags were flying over the hundreds of people waiting to say their final goodbyes to slain Newman officer, Corporal Ronil Singh.

"He was a great man, it's just an honor to be here and with his family," said Randy Rocha, Singh's friend.

Officer Singh's casket was carried into the West Side theatre in downtown Newman.

"It's a difficult day for us, but its an honor to see everyone out. You can see by the overwhelming number of people here , and the support is amazing to this department," said Newman Police Chief Randy Richardson.

Helen Monahan and her family help put up bows to give the officer a proper sendoff.

They were one of the many who stood in line to look at the photos inside, and pay their respects.

"I moved back here to raise my kids away from stuff like this, and it wasn't far from where I lived. It's hard to believe that in this quiet town I was raised in, something like this could happen," she said.

Law enforcement from as far as New York came to honor their fallen brother.

"Even if it's different states, they're still our brothers and sisters and we're there to support them any way they need," said Elvis Alcivar, an NYPD officer.

The officer was gunned down during a DUI traffic stop.

The suspect, Pablo Mendoza, is in custody and is being charged with murder.

Chief Richardson says he's been getting emails from people in different continents, and most recently received a call from President Trump.

"We had a conversation. He called Ronil's wife too. He sends his condolences to our department, let us know that he's here for us and doing what he can to protect us," Richardson said.

Though he says they didn't discuss immigration, the president did mention Officer Singh while talking about border control on Friday morning.

This is the last time Officer Singh will be in Newman.

As his family and fellow officers go to a second viewing, he's expected to be laid to rest on Saturday.

Funeral services will take place on Saturday in Modesto.