Clinton and Kaine debut as Democratic ticket in Florida 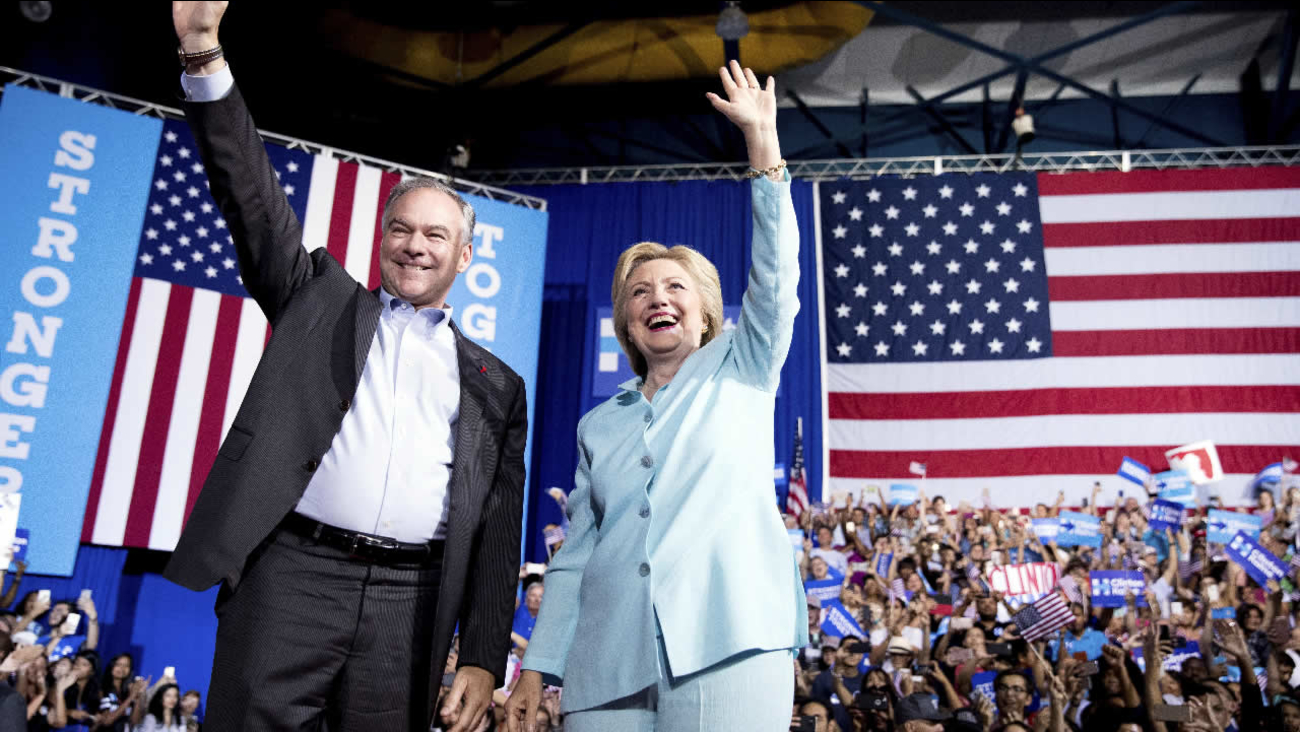 AP
MIAMI -- Hillary Clinton introduced running mate Tim Kaine as "a progressive who likes to get things done," joining the Virginia senator in the crucial battleground state of Florida to help kick off next week's Democratic National Convention.

Clinton said Kaine cares more about making a difference than making headlines, and is "everything that Donald Trump and Mike Pence are not."

"I like to fight for right," Kaine said, detailing his life in public service. Speaking at times in Spanish, he drew comparisons between the Democratic ticket and Trump. "Isn't it great already," he said of America.

“I know the NRA...They’ve campaigned against me in every statewide race I’ve ever run, but I’ve never lost an election.” —@timkaine

Clinton offered Kaine the vice presidential spot on the Democratic ticket in a phone call on Friday night. His selection completes the line-up for the general election. Clinton and Kaine will face Republican Trump and his running mate, Pence, the Indiana governor.

Kaine, 58, was long viewed as a likely choice, a former governor of politically important Virginia and mayor of Richmond who also served as chairman of the Democratic National Committee.

He also had a particularly powerful backer: President Barack Obama, who advised Clinton's campaign during the selection process that Kaine would be a strong choice.

Help welcome @TimKaine to the team. Get your sticker today to show your support: https://t.co/BJ0H3RD4d0 #ClintonKaine

Kaine is a fluent Spanish speaker with a reputation for working with Republicans.

"Trying to count the ways I hate @timkaine," Arizona Republican Sen. Jeff Flake wrote on Twitter. "Drawing a blank. Congrats to a good man and a good friend."

Kaine was the choice over Agriculture Secretary Tom Vilsack, a longtime friend of the candidate and former President Bill Clinton.

We now know #HillaryClinton's chosen running mate. But who is #TimKaine? https://t.co/1SXWzRV1DOhttps://t.co/Krp6P5N7Qi

The senator is viewed skeptically by some liberals in the Democratic Party, who dislike his support of free trade and Wall Street. Shortly after Friday's announcement, Stephanie Taylor of the Progressive Change Campaign Committee said Kaine's support for the Trans-Pacific Partnership trade pact gives Republicans "a new opening to attack Democrats on this economic populist issue."

Notably, a campaign aide said Kaine made clear "in the course of discussions" that he shares Clinton's opposition to TPP in its current form.
Clinton's campaign teased the announcement throughout Friday, encouraging supporters to sign up for a text message alert to get the news - a favorite campaign method for getting contact information about voters.

The Democratic candidate made no mention of her impending pick during a somber meeting with community leaders and family members affected by the Pulse nightclub shooting in Orlando and a later campaign rally in Tampa.

When the news came via text, she quickly followed it with a message on Twitter: "I'm thrilled to announce my running mate, @TimKaine, a man who's devoted his life to fighting for others."

Trump also announced the choice of his running mate on Twitter, and followed it up with an announcement the next day at a hotel in midtown Manhattan - a curious choice given the state's strong Democratic leanings.

Clinton and Kaine appeared at Florida International University in Miami. Florida is the nation's premier battleground state, and the bilingual Kaine is likely to be a valuable asset in Spanish-language media as the campaign appeals to Hispanic Americans turned off by Trump's harsh rhetoric about immigrants.

Before entering politics, Kaine was an attorney who specialized in civil rights and fair housing. He learned Spanish during a mission trip to Honduras while in law school. During his political career, he's demonstrated an ability to woo voters across party lines, winning his 2006 gubernatorial race with support in both Democratic and traditionally Republican strongholds.

His wife, Anne Holton, is the daughter of a former Virginia governor and is herself a former state judge and the state's education secretary. The couple has three children.

Trump, in a text to his own supporters, said Obama, Clinton and Kaine were "the ultimate insiders" and implored voters to not "let Obama have a 3rd term."

Kaine got some practice challenging Trump's message when he campaigned with Clinton last week in northern Virginia, where he spoke briefly in Spanish and offered a strident assault on Trump's White House credentials.

"Do you want a 'you're fired' president or a 'you're hired' president?" Kaine asked in Annandale, Virginia, as Clinton nodded. "Do you want a trash-talking president or a bridge-building president?"
Related topics:
politicsfloridadonald trumpbernie sanderspresidential racemike pencedemocrats2016 electionu.s. & worldtim kainehillary clinton
Copyright © 2020 by The Associated Press. All Rights Reserved.
RELATED 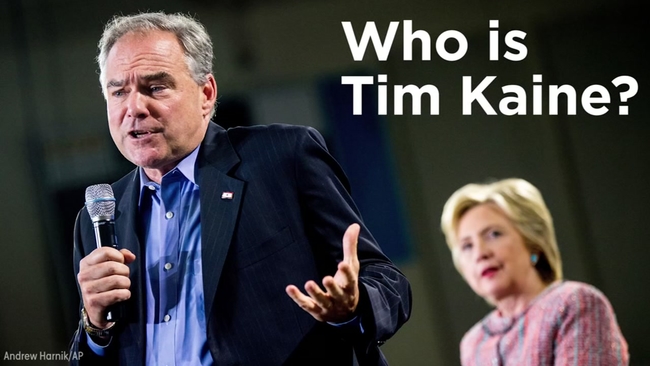