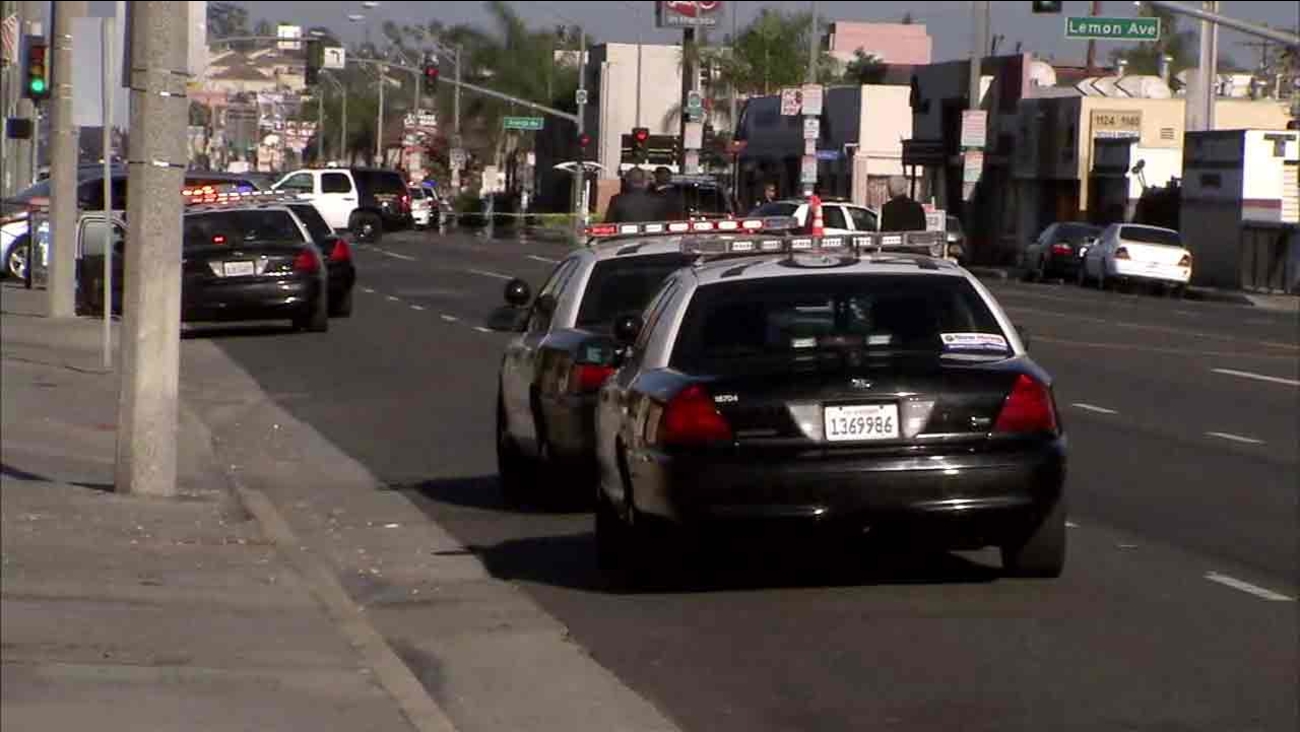 Patrol cars surround the scene of an officer-involved shooting in Long Beach on Sunday, Sept. 11, 2016.

LONG BEACH, Calif. (KABC) -- Six people were arrested in connection with a gang-related crime spree in Long Beach that involved armed robbery, a deadly shooting and car theft, and ended with one being shot by an officer, police said.

The incidents happened Sunday, but police released details on Wednesday, calling it a "complex investigation."

According to Long Beach police:

The crime spree started just after 3 a.m. Sunday, when some of the suspects allegedly tried to rob two people at gunpoint in the 100 block of West 9th Street. The victims fled before they were robbed or injured.

Only 20 minutes later, a fatal shooting was reported near Locust Avenue and East 12th Street. A man, later identified as Juan Ricardo Garcia, 25, of Long Beach, was found on the ground with a gunshot injury and was later pronounced dead at the scene. Police say the murder was gang-related.

Just a few minutes after that, a robbery involving multiple victims was reported in the 1300 block of East 14th Street. Four suspects driving two vehicles robbed the victims of money, property and car keys, police said.

The car matching the keys was stolen from the same area a few hours later.

As detectives investigated the series of crimes, they eventually spotted a vehicle at a parking lot near Pacific Coast Highway and Lemon Avenue which they believed held multiple suspects, considered armed and dangerous. As the detectives were waiting for more officers to arrive, they say the stolen car pulled up and parked near the other vehicle.

When officers moved in, one of the suspects took off in a vehicle and the others ran off on foot. One suspect was hit by gunfire from an officer and transported to a hospital in critical condition. Police said they did not find a gun on him at the time of his arrest.

The car that drove off hit an unoccupied vehicle and the suspect then fled on foot. An officer fired at him, but he was not struck. He was later arrested in the neighborhood. Police did not find a gun on him at the time of his arrest.

Three other suspects were found and arrested inside a nearby business and one of them had a gun, officers said.

One more suspect was arrested after he broke into a house in the 1700 block of Lemon Avenue. He will also be charged with residential burglary, police said.

Police declined to release the identity of the suspects, other than they were five male adults and one male juvenile, as they continue investigating the case.