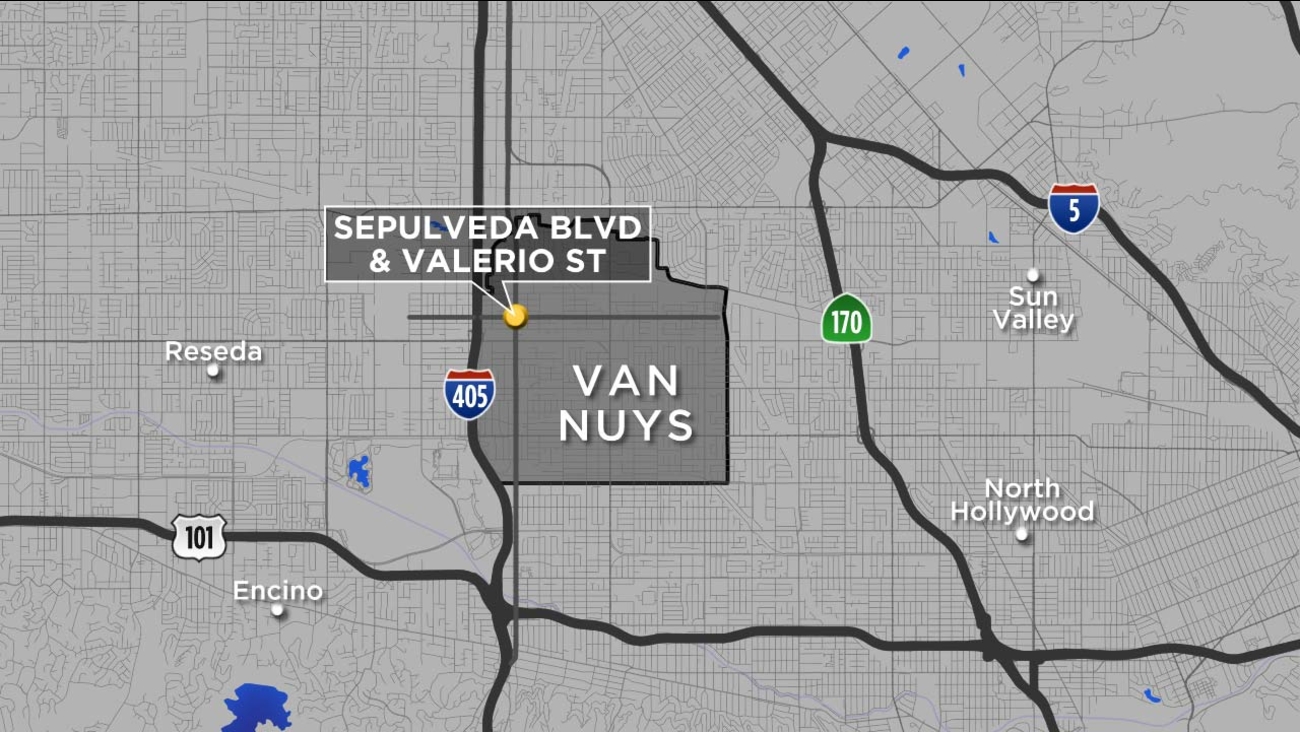 A map shows the location where a man was killed in a carjacking attack in Van Nuys on Sunday, Nov. 6, 2016. (KABC)

VAN NUYS, LOS ANGELES (KABC) -- An investigation is underway in Van Nuys following a bizarre road-rage fight between a driver and a cyclist that turned into a deadly car robbery.

The incident occurred on Sunday shortly before 10 p.m. when police officers responded to a call of a robbery/grand theft auto at the 7400 block of Sepulveda Boulevard, near Valerios Street.

When police arrived on scene, they found a 37-year-old man on the ground and a witness standing next to him. Los Angeles County Fire Department paramedics transported the victim to a local hospital, where he later died.

Investigators said the victim and witness were in their car traveling north on Sepulveda Boulevard when they saw a man on a bicycle heading southbound toward them.

The victim honked his horn at the cyclist, who hit the victim's windshield with his fist. That's when the victim exited his car, and a physical altercation took place.

According to authorities, the cyclist punched the victim, causing him to fall on the ground. The witness exited the car as the suspect got into the victim's vehicle and began to drive away.

The victim clung to the driver's side door, but the suspect rammed that side of the car into parked cars, causing the victim to let go.

Police said the suspect drove off along Sepulveda Boulevard. He was described as a Hispanic male, approximately 20-30 years old, standing at around 5 feet and 11 inches, weighing between 140 and 160 pounds, wearing a dark hooded sweatshirt and dark pants.

If you have any information about this incident, you're urged to contact Valley Bureau Homicide Detective Steve Castro at (818) 374-1925. During non-business hours or weekends, you can contact police at (877) LAPD-24-7. You can also submit anonymous tips by calling L.A. Regional Crime Stoppers at (800) 222-TIPS.
Related topics:
van nuyslos angelessearchfightlapdattackrobberyman killedcarjackingroad rage
Copyright © 2021 KABC-TV. All Rights Reserved.
More Videos
From CNN Newsource affiliates
TOP STORIES