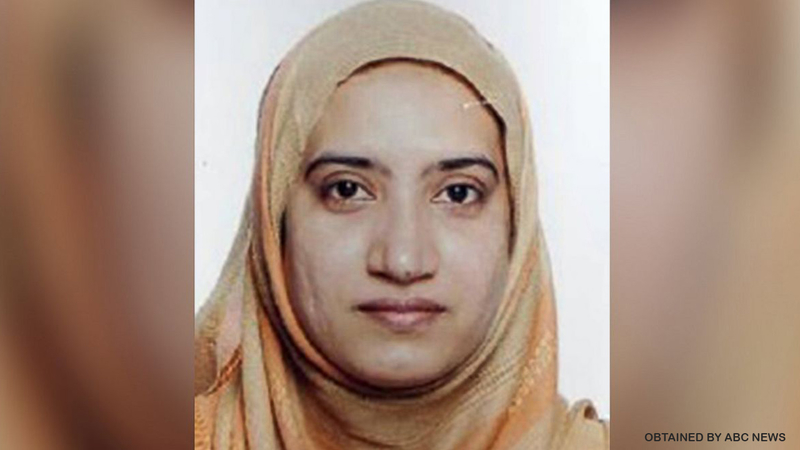 A U.S. official said Malik pledged allegiance to the Islamic State group and the terror group's leader, Abu Bakr al-Baghdadi, on Facebook using an alias, then deleted the messages before the attacks.

Malik's online activities provided the first significant details suggesting a motive for her participation with her husband, Syed Farook, in the shooting at the Inland Regional Center that left 14 people dead on Wednesday.

In 2007, she returned to Pakistan to study at Bahuddin Zakri University in Multan and stayed until 2012, according to a Pakistani intelligence official. She was said to be a brilliant student and was not known to have religious or political affiliation while there.

During a press conference Friday, the attorneys for the Farook family said Malik and her husband met on an online dating website. Sherman Oaks attorney David Chesley said Malik was a soft spoke, very private and conservative person who had only lived in the U.S. for a little more than a year.

Chesley and fellow attorney Mohammad Abuershaid said that Farook's family were not aware of the couple planning the deadly attack.

"None of the family members had any idea that this was going to take place. They were totally shocked," Chesley said.
Farook's family told their attorneys that there was no behavioral evidence that signaled a motive for the couple's attack.

Both attorneys stressed that despite the FBI confirming that the attack is being investigated as an "act of terrorism," there is no evidence linking the couple to any larger terrorist group or terror cell.

When describing Farook and Malik's marriage, Abuershaid said the Muslim couple was very traditional and isolated. Malik wore a burka, which meant Farook's brothers never saw her face, and she would only sit with women.

The sister of Syed Farook, one of the suspects in the San Bernardino mass shooting, spoke with ABC News about her brother and the attack.

Farook was described as a "very isolated, introverted individual," according to Chesley and family members.

Saira Khan, Farook's sister, said the couple always seemed content. She added that she had no idea who Malik pledged allegiance to or why, adding that her sister-in-law never mentioned ISIS or anything political.

The couple lived in a small, two-bedroom home in Redlands with Farook's mother, who helped take care of their daughter. Both attorneys said Farook's mother never saw any weapons, ammunition, or pipe bombs that the authorities found during overnight searches.

The couple's 6-month-old daughter is currently in the care of child protective services, but the family is trying to bring her back under their care, the attorneys said.

Khan said she will raise her niece as one of her own and will shield her from learning too much about the terror attack her parents committed until she is old enough.

"I think for the time being we want her to enjoy her innocence, we don't want her to know everything. But I think eventually she will find out on her own," she said.