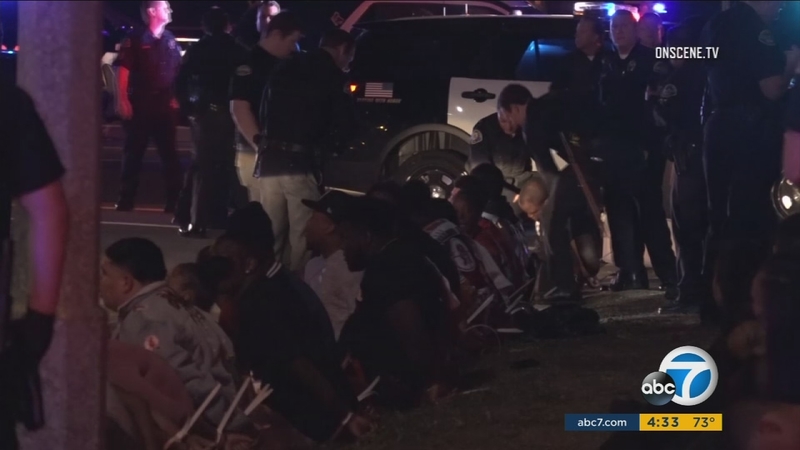 HUNTINGTON BEACH, Calif. (KABC) -- Two men have been arrested after the assault of a 7-Eleven clerk that occurred Saturday night when a crowd of unruly party bus passengers stormed the Huntington Beach convenience store and stole several items, authorities said.

According to the clerk, who gave his name only as Mohammad, the incident began about 11 p.m. when the bus pulled into the 7-Eleven parking lot in the 700 block of Pacific Coast Highway.

Some 30 people rushed into the store, Mohammad recalled, and began looting beer, candy and chips. The clerk said he asked the individuals to pay for the items but gave up when he realized the request was futile.

"They just pushed and shoved him around as he was trying to stop them from stealing items from the store," said Officer Jennifer Marlatt, spokeswoman for the Huntington Beach Police Department.

After a few minutes, the mob re-boarded the bus and left the scene, Mohammad said.

A strong-arm robbery was reported at 11:08 p.m., according to police, who said the 7-Eleven employee was assaulted but not injured.

A police helicopter subsequently spotted the bus, which was pulled over with some 80 people inside, police said. The vehicle was designed for a capacity of 50.

Officers from the police departments of Newport Beach, Seal Beach, Costa Mesa, Westminster and Laguna Beach assisted as the occupants were all ordered out of the vehicle and detained.

Seven loaded handguns were seized after being found inside the bus, authorities said, adding that none were used in the robbery.

Through the use of surveillance video, the clerk identified the two men who allegedly assaulted him, investigators said. Wynzel Worthan, 18, of Compton, and Isiah Bryant, 21, of Los Angeles, were arrested on suspicion of conspiracy to commit robbery.