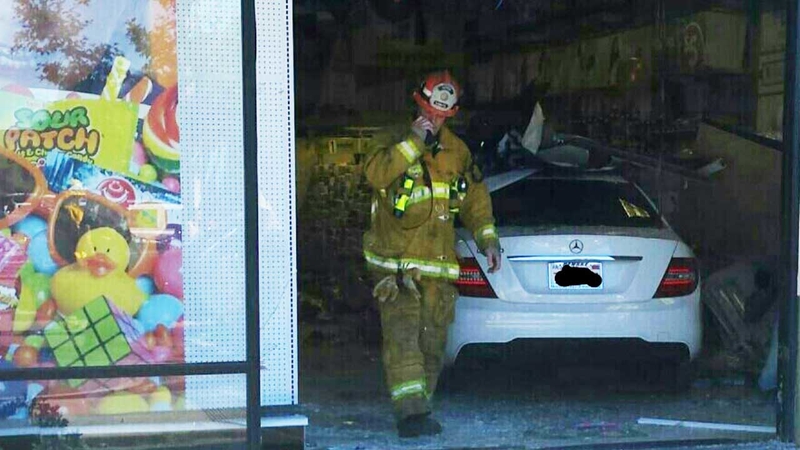 SAN DIMAS, Calif. (KABC) -- Four children were injured after a vehicle plowed through a Party City story in San Dimas on Saturday.

A 35-year-old woman lost control of her Mercedes-Benz C250 around 12:05 p.m., went over the curb and sidewalk, and crashed through a glass window at the store, located in the 800 block of W. Arrow Highway, according to the Los Angeles County Sheriff's Department.

Witnesses said the store was packed with customers shopping for Halloween.

There were fears that people may have been trapped underneath the car. Witnesses rushed over, but no one was under the vehicle.

Customers said it was absolute terror.

"Glass shattering noises and then the wall started moving, and then actually all the helium tanks started going off because that's where you fill up the helium right there," Daren Graves said. "Balloons and metal debris, everything was just flying."

"She said her foot got stuck on the pedal, and she said she couldn't get it off," Albert Beltran said.

Three of the children suffered minor injuries and were treated at the scene. A 14-year-old girl momentarily lost consciousness and complained of leg pain, sheriff's officials said. She was airlifted to Los Angeles County+USC Medical Center.

Witnesses said they saw a father holding a baby who suffered two deep cuts to his face.

The driver has not been arrested as the investigation into the cause of the crash continues.
Related topics:
san dimaslos angeles countycar crashcar into building
Copyright © 2021 KABC-TV. All Rights Reserved.
More Videos
From CNN Newsource affiliates
TOP STORIES