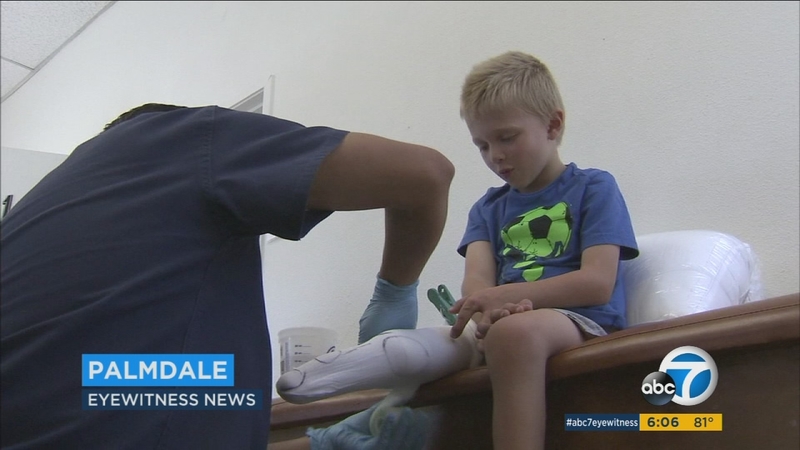 PALMDALE, Calif. (KABC) -- After Eyewitness News aired the story of a 4-year-old boy from Rancho Santa Margarita whose prosthetic leg was stolen, the public responded with an outpouring of support, including multiple offers to help get him a replacement at no cost.

On Tuesday, Liam Brenes was fitted for a new leg at a Palmdale company and he could be literally back on his feet again by Thursday.

"My thought was, thank you Lord," said the boy's father, Frank Brenes. "My son isn't going to have to be trapped, immobile, unable to do all these things that he wants to do: Running, jumping, karate, playing."

The prosthetic leg was stolen Sunday when the family was on a trip to Crystal Cove State Beach in Orange County.

It was Liam's first-ever trip to a beach. He had taken the prosthetic off to protect it from the salt water and was wearing an old one that he had outgrown. Someone stole the leg and other belongings while the family was in the water.

While insurance would cover part of the expense, a replacement was expected to take weeks and could have cost the family thousands out-of-pocket.

Michael Metichecchia with Essential Orthotics and Prosthetics in Palmdale is an amputee himself and was moved by the story.

"It's one of those rare moments that you take something you do and you get to do something better with it," he said. "You get to give back."

Liam's new leg will be decorated with a "Ghostbusters" theme in honor of his favorite movie.

Another offer of help came from "Shark Tank" star Robert Herjavec. Since the leg has been taken care of by Essential Orthotics, Herjavec has arranged for the family to get a VIP tour of Disneyland.

"It just broke my heart," Herjavec said. "I mean, to think about what the little boy has gone through. And with everything that's happening in the world and so much negativity, I just thought if I had the opportunity to make him grow up in an environment where he thinks there are some good people in the world, why not?"

Liam's parents were overwhelmed with gratitude and gave heartfelt thanks to all those who offered to help.