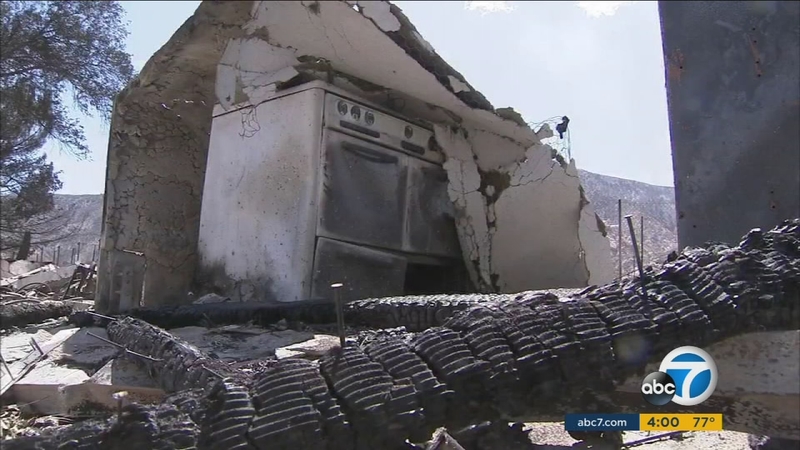 PHELAN, Calif. (KABC) -- Ninety-six homes and 213 outbuildings have been destroyed in the Blue Cut Fire, an official announced Friday, as the massive blaze continued to burn near the Cajon Pass.

Since the blaze ignited Tuesday, it has charred 37,020 acres. San Bernardino County fire officials said they are still in the process of counting the number of destroyed structures, and the figures may increase as they get more information.

Firefighters made significant progress against the fire Thursday and overnight, bringing the containment to 40 percent by Friday night.

"Crews really buttoned up some areas, but the possibility is still there for explosive growth," fire spokesman Brad Pitassi said.

By Friday afternoon, evacuation orders were lifted for residents of Phelan, west of Green Road to Snowline Road.

Some evacuated residents east of Interstate 15 were allowed back home on Thursday, including East Oak Hills, South Hesperia and the West Oak Hills area. However, about 34,500 homes remain under evacuation orders.

Many are not being allowed to return home until damaged power lines are back up and running.

Hundreds of power lines were toppled all across the burn area. Southern California Edison crews are only allowed to do their work in areas where the fire danger has passed.

Fire crews said the blaze tore through like a tornado, and they could do little to stop its destructive path. Officials have been telling residents to prepare for the worst.

About 1,580 firefighters from agencies throughout the region were on the scene, but plans were in the works to begin demobilizing some of the firefighters by the afternoon.

Fourteen water-dropping helicopters are aiding the firefight, and additional air support was expected later in the day, according to the U.S. Forest Service.