WABC
LITTLE RIVER, S.C. -- The body of an autistic 4-year-old boy who had been missing since Christmas Eve has been found in a pond in Horry County, the Associated Press reported.

Coroner Robert Edge told local media outlets that the body of Jayden Morrison, of White Plains, was found in a pond in Little River on Friday morning.

Police, first responders, K-9 units, dive teams and volunteers had been searching for the boy since he disappeared from his grandmother's house around 5:30 p.m. Wednesday.

The New York boy's family had been visiting relatives in the area.

Hundreds of emergency workers and volunteers searched through Christmas Day for Jayden. Lt. Raul Denis of the Horry County Police said he was reported missing about 6 p.m. Wednesday.

Divers searched ponds earlier in a 5-square mile area near the community on the North Carolina border and searchers do not believe the child, who was last seen wearing only pajamas, drowned, he said. Drones, helicopters and four-wheelers also were being used in the search.

Morrison said her son is autistic and non-communicative, and wouldn't respond if his name is called. She said he likely would not be able to find his way home because he is not familiar with his grandmother's neighborhood.

A helicopter from the State Law Enforcement Division in Columbia arrived on the scene Thursday. 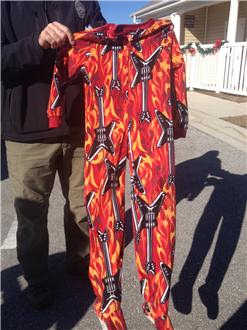 Dozens of police and volunteers have since been searching the surrounding area by land and air for any signs of the small boy. 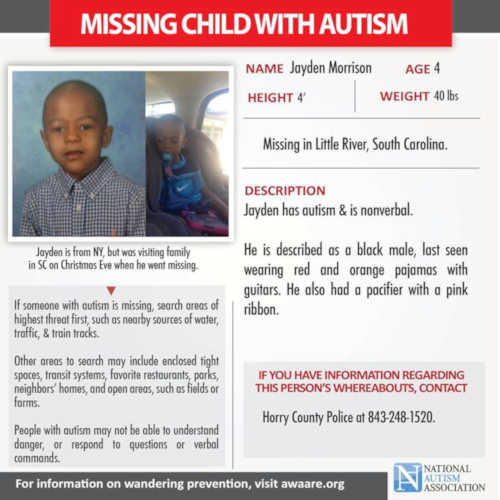 Meanwhile, neighbors and close friends in White Plains said they're keeping the family in their thoughts and prayers.

Belinda Austin said her daughter used to babysit Jayden and his brother, and she wishes she could do more now in their time of need.

"I'm shocked - I wish I was there to assist in the search for them," Austin says, "just think about it being your child or your grandson or your nephew - you would want people to assist you so I would think that everyone would maybe want that same."