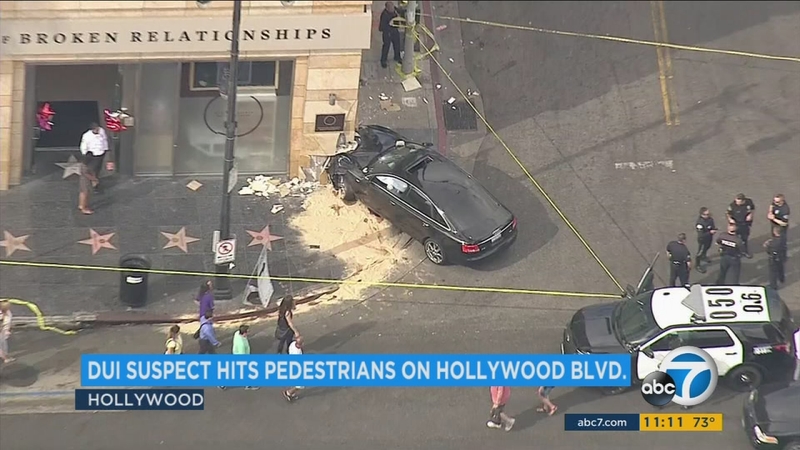 HOLLYWOOD, LOS ANGELES (KABC) -- A woman was arrested on suspicion of DUI after her Audi sedan struck two pedestrians in Hollywood and then smashed into the Museum of Broken Relationships building, police said.

The collision happened just after 3 p.m. on Hollywood Boulevard at McCadden Place.

Police say the sedan was involved in a minor collision down the street from the museum and fled the scene. The driver tried to turn onto McCadden, but lost control and struck two female pedestrians on the sidewalk before crashing into the museum building.

The injured pedestrians were transported to a local hospital. One had minor injuries and the other was injured in the head and listed in stable condition.

The driver fled the scene on foot, police said. Officers later took her into custody near the crash site.

Police said the driver, a woman in her 30s, was arrested on suspicion of DUI and hit-and-run.

Two pedestrians were struck in a hit-and-run before the Audi sedan crashed into the Museum of Broken Relationships building in Hollywood, police said.

Hollywood Boulevard was down to one lane and McCadden was closed off during the investigation.

The museum, which founded its first permanent site in Croatia in 2010, opened in Los Angeles this year. It collects objects from the public that represent ended relationships.

"The Museum's concept was born when an artist ex-couple in the midst of their own breakup wondered what people did with objects that had been meaningful in their relationships," the museum's website states.
Related topics:
hollywoodlos angeleslos angeles countyhit and runpedestrian struckpedestrian injured
Copyright © 2021 KABC-TV. All Rights Reserved.
More Videos
From CNN Newsource affiliates
TOP STORIES