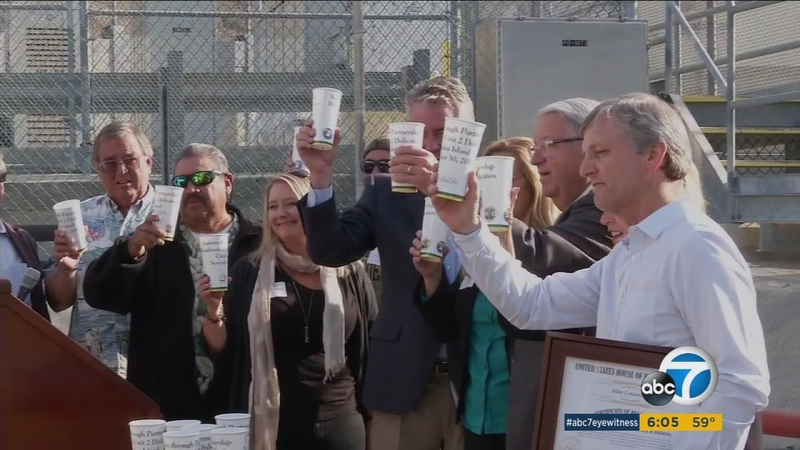 AVALON, Calif. (KABC) -- Catalina Island is getting a new tool to help fight the drought, as officials unveiled a new desalination plant on Monday to bring additional freshwater to the island community.

Southern California Edison unveiled the new drought proof source as a way to avoid asking residents on the island to cut 50 percent of their water use.

"It further augments the supply of water and frankly offers more diversity of source for the community here," Greg Ferree with Southern California Edison said.

The new $3 million plant can pump out an additional 125,000 gallons of potable water per day.

Edison officials don't know yet how the new plant will affect rate-payers, but many said it's a price they're willing to pay.

"We don't want Stage 3, the solution is in our front yard, it's right here, its' the desal plant," Steve Bray, a restaurant owner on the island said.

Stage 3 would mandate people on the island cut use by 50 percent. Residents have already reduced usage by 40 percent, after Edison mandated a 25 percent cut in August.

Restaurants like Maggie's Blue Rose now charge 50 cents for a bottle of water and put placards on every table reminding visitors to conserve.

"You just have to really be cognizant, you have to be very aware of your water shortage," Bray said.

Due to its isolation, the island only gets water from two reservoirs and a desalination plant.

Many said another cut would create a disaster scenario for a tourism-based economy.

"We might have found that we were only open a couple days of week, you know, and that affects people coming over on the boat and the revenue that we get from the day trippers," Avalon Mayor Ann Marshall said.

The new plant eases fears for now, but officials stressed it doesn't change the need to conserve or the hope that El Nino delivers this winter.