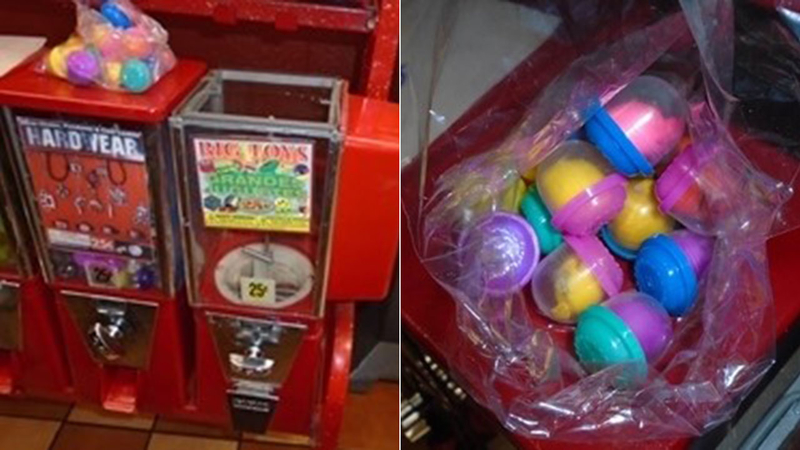 BELL GARDENS, Calif. (KABC) -- A young boy who bought a toy from a vending machine at a Bell Gardens restaurant got a not-so-welcome surprise on the inside: a powder that was initially thought to be cocaine.

Bell Gardens police say the putty-ball toy was purchased on Monday from a 25-cent machine at the Taqueria Los Altos at 6939 Eastern Ave.

When the boy was playing with the toy, it ruptured and a white powder came out, police said.

Balloons containing a white powder were found inside toys sold in a vending machine at a Bell Gardens restaurant, police said.

The boy's mother called police, who conducted testing that came back positive for cocaine.

A day later, however, police corrected that report, saying in fact the substance was not cocaine, but possibly talcum powder or baking soda, not representing a public health risk. The initial test had brought back a false positive, police said.

They seized 17 additional toys from the vending machine, recovering a total of 136 grams, or 4.8 ounces of the powder.

Inside the toys' plastic cases were balloons, with faces drawn on them. The powder was inside the balloons.

Police said the boy did not ingest the substance and was OK.

Bell Gardens police said a phone number on the machine was connected to a company called Snack Time Vending.

Eyewitness News spoke to the owner of the vending company, who said the machine does not belong to them and they have nothing to do with it.

Police have also obtained surveillance video that shows a person loading the vending machine the same day the child found the toy and they are hoping to locate that person.

A photo of the red coin-operated machine indicates it is labeled "Big Toys" and "Grandes Juguetes" and sells toys for a quarter.

Any businesses who may have a toy or candy vending machine from this company are asked remove it from public access and contact the Bell Gardens Police Department.