Cops Warned of Train Shot on Night of Amtrak Crash 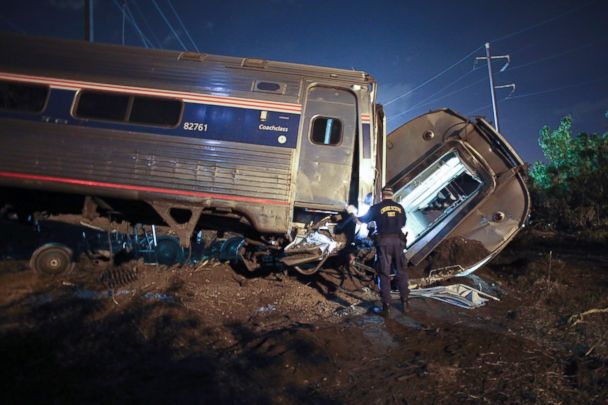 The FBI is looking into whether there is any link between three different trains that were all apparently hit by objects just a few miles apart, within a few minutes, the night of the deadly Amtrak derailment.

One of those was the Amtrak train that derailed Tuesday night north of Philadelphia, killing eight people and injuring more than 200. Another was another Amtrak train, a southbound Acela train that was apparently hit in a passenger window.

The third was a SEPTA commuter train that had its windshield shattered, and train personnel believed someone had shot at them.

Philadelphia transit police dispatchers can be heard on scanner audio from Tuesday night, warning that a commuter train may have been shot at.

The train was held at the North Philadelphia Train Station that night, after one of its winshields was struck by an object and shattered.

"Transit 1, let those personnel know, the rock put out a text, that that train was shot at, so use caution," a SEPTA Transit Police dispatcher can be heard saying on the scanner audio posted by Broadcastify.com. "All units copy."

On another recording of scanner calls from Tuesday night posted by Broadcastify.com, dispatchers can be heard discussing that SEPTA train.

"The train that's standing is the one that's standing by North Philadelphia regional rail," a dispatcher can be heard saying. "An unknown object made contact with that train shattering the windshield. We do not have an update on any injuries because they are prohibited from making any communication with the engineer while he's still on the rail. But it is a train that has had a foreign or unknown object make contact, shattering the windshield the train is going to be standing on the hill."

According to SEPTA, an unknown projectile struck the engineer's window of SEPTA Trenton Line train #769 at around 9:10 p.m. Tuesday. The engineer did not report any injuries. The train was initially held near the North Philadelphia Station based on damage to the train window and later based on the suspension of the line due to the Amtrak derailment.

The 80 passengers were walked off the train and transferred to buses, SEPTA said.

Bastion told investigators that the last thing he remembered happening before the crash was ringing the train bell as he passed through the North Philadelphia train stop. He did not mention anything about his alleged radio conversation with a local Philadelphia train engineer.

Sumwalt said that the conversation was brought to light during an interview with one of the Amtrak train's three conductors who was on board at the time of the crash. That conductor told investigators that she overheard the conversation between the two engineers on her portable radio just moments before the train derailed.

"Right after she recalled hearing this conversation between her engineer and the SEPTA engineer, she felt rumbling and her car went over on its side," Sumwalt said.

The unnamed 39-year-old conductor said that she heard the other engineer, who was at the controls of one of the city's SEPTA mass transit trains, who radioed in saying that he believed "he had been either hit by a rock or shot at," prompting Bastion to respond and say that he believed something similar had happened to his train.

Sumwalt said that they are going to further investigate her report that she overheard him saying that the train had been struck.

"We have seen damage to the left hand lower portion of the Amtrak windshield that we have asked the FBI to come in and look at for us," Sumwalt said.

SEPTA is cooperating with the NTSB's request to interview their train engineer, officials said. A date has not been set yet for the interview.

The NTSB announced Thursday that they were able to determine that the train accelerated more than 35 mph in the final 65 seconds before the crash. The train's forward facing camera recorded the speed but investigators were not able to determine why it was accelerating at that point or if the engineer was actively raising the speed.