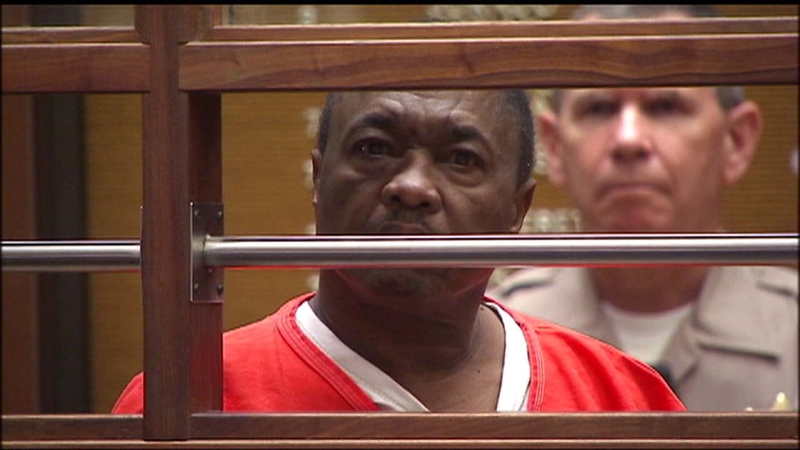 LOS ANGELES (KABC) -- The jury has begun deliberations in the murder trial of accused "Grim Sleeper" serial killer Lonnie Franklin, even as new information was disclosed Wednesday about the defendant's record out of the jury's presence.

In a hearing held while the jury was behind closed doors, prosecutor Beth Silverman disclosed that Franklin has a conviction for a sex crime outside the United States on his record - a gang rape in Germany when he was in the Army.

Silverman told the court that Franklin and two friends borrowed a car, drove to a nearby village, dragged a woman to the car and sexually assaulted her.

Los Angeles Police Department detectives learned of the incident after searching Franklin's South Los Angeles home. They found photos of Franklin in his Army uniform and discovered he had been drafted in 1973, and then found records which detailed the rape that was prosecuted by the German government. They were convicted and imprisoned in Germany, Silverman said.

If Franklin is convicted in the current trial for the murder of 10 women and the attempted murder of an 11th, Silverman plans to present the Germany crime information to the jury.

LAPD investigators believe there are as many as 30 murders connected to Franklin. At least some of those earlier cases are not being prosecuted currently because they would have delayed the trial.

The jury deliberated for about four hours Wednesday and had a question for the judge, which was not disclosed publicly.
Related topics:
los angelessouth los angeleslos angeles countytrialmurderserial killer
Copyright © 2021 KABC-TV. All Rights Reserved.
More Videos
From CNN Newsource affiliates
TOP STORIES