KABC
DOWNTOWN LOS ANGELES (KABC) -- Los Angeles City Council President Herb Wesson says he's concerned about his safety and that of his family's after a City Hall critic allegedly made a criminal threat against him.

On Thursday morning, he vowed to take a stand against hate speech.

"As a young man, I sat in the kitchen table of my grandmothers and I heard them tell my aunts and my uncles of liquored-up Klansmen running through the south, terrorizing black people," Wesson said during a press conference.

Wesson spoke out after he was handed a public comment card at a committee meeting last week that contained images of a burning cross and a person hanging from a tree by a noose. At the center of the card was a drawing of what appears to be a triangular-shaped person in a Ku Klux Klan hood carrying a noose and a sign that says "Herb = N-word."

"It was a drawing of a Klan member with a noose in his hands with my name and the [N-word] attached to it, and then a photograph of an individual hanging from a tree," Wesson said.

Wayne Spindler, a frequent City Hall critic, was arrested Friday on suspicion of making criminal threats. His bail was set at $75,000 and he was released at about 10 p.m. that day.

The 46-year-old, who has attended city council meetings for years and sometimes wearing a KKK hoodie with a swastika, admitted he drew those images.

"They don't listen to us. The only way they listen to us is if we're emphatic," Spindler said.

He plans to fight the charges and sue the city.

"This guy [Wesson] is just using this as a ploy," Spindler said. "He wants to get me and other people out of city hall because we're making a difference." 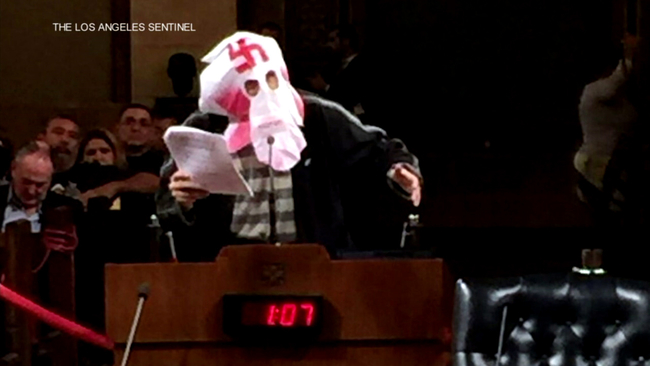