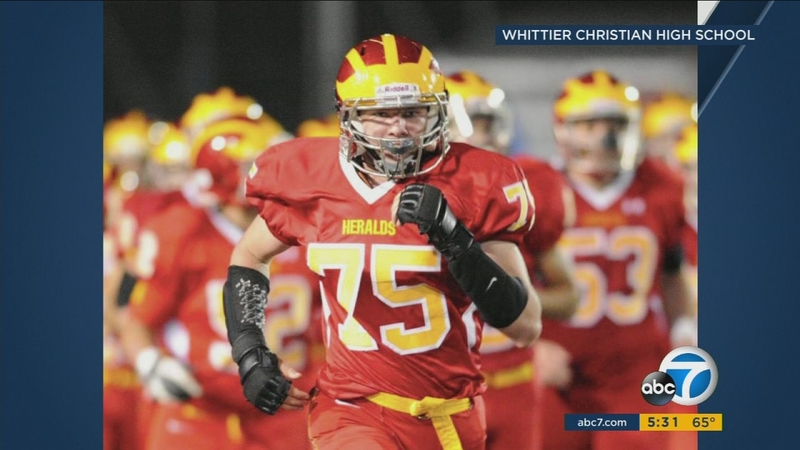 ANAHEIM, Calif. (KABC) -- A 17-year-old La Habra boy died Thursday morning from injuries he had suffered days earlier when struck by metal debris on a freeway in Anaheim, authorities said.

Ethan Hawks, a junior and football player at Whittier Christian High School, was riding in the front seat of a white Hyundai Genesis driven by his mother on the 57 Freeway shortly after 2:30 p.m. Saturday, according to the California Highway Patrol.

"As they were traveling southbound, a piece of metal on the roadway was struck by another vehicle, causing the metal object to get launched towards the Hyundai's path of travel," the CHP said in a statement.

It is with great sadness that I report that we lost Ethan Hawks this morning. He went to be with his Savior. Continue to pray for his family

The object smashed through the sedan's windshield and struck the teenager in the face, causing major injuries, the news release said.

"Ethan's mom was amazing in the face of this," a GoFundMe page stated, "and she was able to reach over to the passenger seat to try to control Ethan's bleeding as well as drive him straight to the hospital herself."

After the mother and son arrived at St. Joseph Hospital in Orange, the injured teen was transported by ambulance to the trauma unit at UC Irvine Medical Center.

He succumbed to his wounds just after 5 a.m. on Thanksgiving Day, according to the Orange County coroner's office.

Family and friends of the teen were stunned to hear the news and are uniting to help everyone heal.

"The nature of the accident has all of us asking questions, right? And wondering...how, who, when and what, but at the same time, we're trying to say, 'So how do we now care everyone in our community? From the Hawks family to all of our students that attend our school?'" said Carl Martinez, Whittier Christian High School Head of School.

According to the GoFundMe page set up for the family, which has doubled its goal, the teens' father and sister made their way from Pennsylvania to be by his side before he passed.

Anyone with information about the freeway collision is asked to call the Highway Patrol's Santa Ana office at (714) 567-6000.