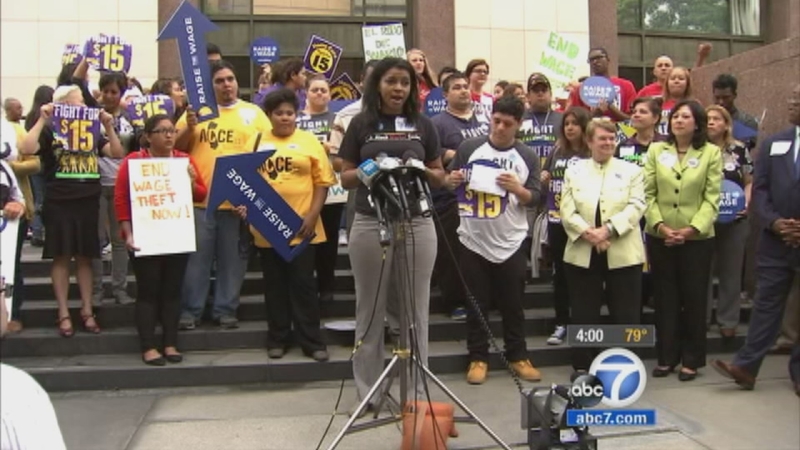 LOS ANGELES (KABC) -- The Los Angeles County Board of Supervisors voted 3-2 Tuesday to incrementally raise the minimum wage to $15 an hour in unincorporated areas of the county over the next five years.

County lawyers will now draft a proposed law gradually increasing the wage mark, which the board will consider later this year.

"The more you make, the more you spend. Unfortunately, people making the minimum wage, they don't save very much. It's a pair of shoes they haven't been able to buy or food at the market," said L.A. County Supervisor Sheila Kuehl.

If approved, the hourly wage would increase in steps until it hits $15 in 2020. Small businesses will have until 2021 to meet the wage increase.

Then, beginning in 2022, the wage would be increased annually based on inflation, according to the proposal.

The vote comes just weeks after the city of Los Angeles took a similar step to fatten paychecks for employees at the lower-rung of the economy, making it the largest city in America to guarantee the minimum wage of $15.

"A higher wage in this county, in unincorporated areas like in the city, will attract the best workers, and the hardest working, the least training, the best cost savings for our businesses," said L.A. Mayor Eric Garcetti.

Many people attended a rally outside of City Hall Tuesday morning in downtown Los Angeles. Supporters say there are many people in the county that work full time that can barely make ends meet.

"This has been a very long and necessary fight. Every day in Los Angeles is becoming very difficult to survive in less than $15 an hour. There are three million people living in poverty here in Los Angeles County, and every single one of them will benefit from the wage hike," said Roberto Balanzar, a minimum wage worker who participated in the rally.

However, many businesses reject the wage hike saying the high cost of labor will likely be pushed onto their customers or they'll have to cut jobs.

A motion is before the board to establish an initiative to support small businesses during the wage increase transition.

The vote came a day before Vice President Joe Biden travels to Los Angeles to promote a higher minimum wage.