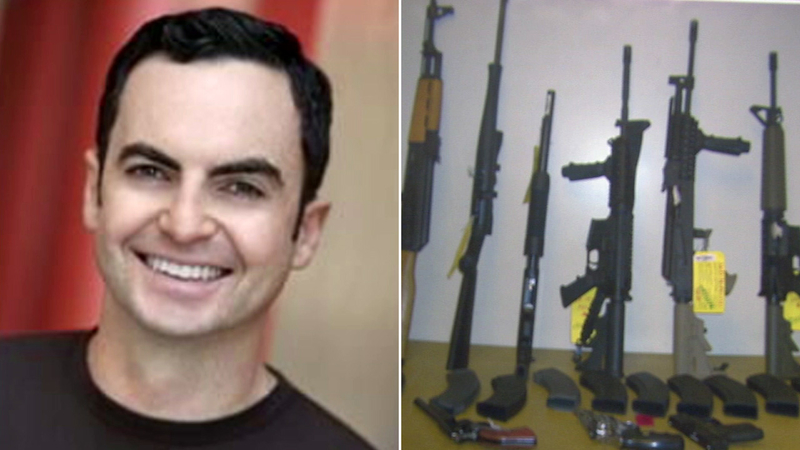 LOS ANGELES (KABC) -- An Agoura Hills man was arrested after authorities said he made criminal threats against the Islamic Center of Southern California.

Los Angeles police said 40-year-old Mark Feigin had a large cache of weapons and ammunition at his home and had the means to carry out the threats.

Authorities said Feigin called the Islamic Center and made deadly threats to its members in September.

"It's sad that we have this maniac threatening this Islamic center," Hedab Tarifi of the Islamic Center of Southern California said.

One call was peppered with profanities and the following day authorities said Feigin threatened to kill members.

"The male caller threatened to kill the person who answered the phone along with other members of the center because of the caller's hatred for Muslims and his belief that Muslims will destroy the United States," Cmdr. Horace Frank with the Los Angeles Police Department stated.

Officials said Feigin was arrested on Oct. 18 at the home he shares with his mother in Agoura Hills.

A search of the home unveiled rifles, shotguns, handguns, several modified high capacity magazines and thousands of rounds of ammunition, according to investigators.

The LAPD Counter Terrorism and Special Operations Bureau Major Crimes Division was also investigating whether Feigin was behind dozens of angry anti-Muslim tweets, one of them stating, "Filthy Islamic beasts have no place in America."

The Islamic Center and leaders from other faiths commended the LAPD for its swift arrest of Feigin, and urged the rejection of all acts of hate-motivated violence.

"This is America represented by all the people here. What Mr. Mark Feigin represents is the victim of hate in our country and falling into the trap of divisiveness, of violence extremism and of hatred in the guise of patriotism," Salam Al-Marayati, president of the Muslim Public Affairs Council said.