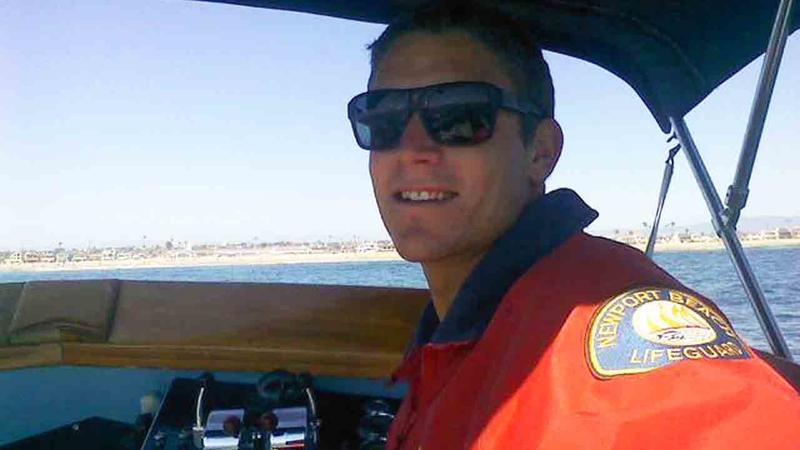 At about 5 p.m., a swimmer was overcome by a wave near 32-year-old Ben Carlson's post. He reached the swimmer near 16th Street, but then they were both hit by a massive wave. Carlson went under and never came back up, lifeguards said.

Rescue boats and search helicopters spent nearly three hours looking for Carlson before he was found around 8 p.m. near 27th Street.

"The other lifeguard personnel on the scene attempted to rescue and assist Ben, but were unable to find him because of the turbulent water and up to 10- to 12-foot surf," Newport Beach Fire Department Chief Scott Poster said.

A male lifeguard died Sunday, July 6, 2014 attempting to rescue a swimmer in distress off Newport Beach.

The male swimmer Carlson was attempting to save made it to shore safely, according to Poster.

"He was there to help at every single moment," Poster said. "It's just an utter tragedy to lose a man of that caliber in the water today."

Lifeguards made hundreds of rescues over the weekend due to strong dangerous rip currents and large waves and warned swimmers who were getting in too deep. It was a preemptive warning designed to save lives after the National Weather Service issued a coastal hazard warning due to the high surf.

"Those lifeguards risked their lives and put themselves in harm's way to protect swimmers every single day," Poster said.