Orange County deputies hand out Christmas cheer instead of tickets 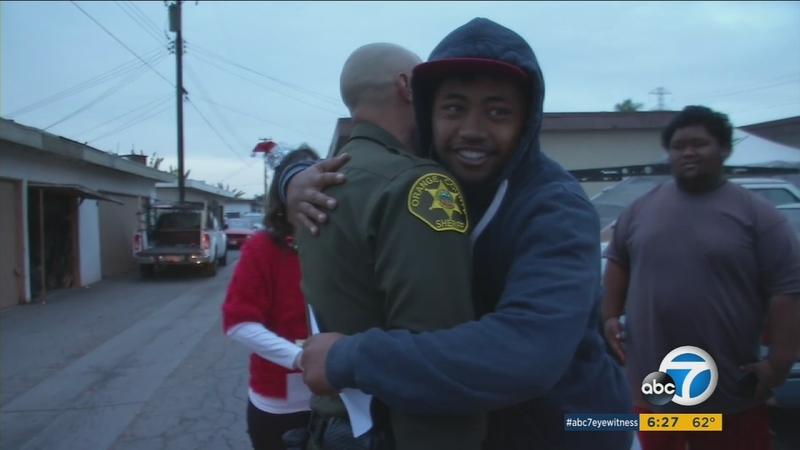 Orange County deputies hand out Christmas cheer instead of tickets

ABC7 went on a ride-along as deputies looked for people to pull over in Stanton and unincorporated Anaheim.

The reactions are what you might expect from anyone who sees the flashing red and blue lights.

"I kind of have a little heartbeat there going a little bit faster," Tino Vea from Stanton said.

Vea and his friends asked several questions, such as "why are we being stopped?" and "why are you recording?"

Then, the deputy handed one of them an envelope.

What followed was a moment the teen and the deputy say they've never experienced.

The teen stood up and asked the deputy for a hug.

Deputies made dozens of the special stops and each time someone opened an envelope, the same shock and joy appeared.

Some were even moved to tears.

"It's the first time someone has given me a gift like this," said one woman.

The gifts are from an anonymous donor.

The donor gave thousands of dollars to the county's Trauma Intervention Program, on the condition sheriff's deputies helped hand the money out to people who could use some help during the holidays.

One woman said she would pay her electric, because her power was about to be shut off.

Another, who was stopped for a brake light that was out, said she could finally pay for car repairs and peace of mind.

The donor also hoped the deputies would feel joy from a different kind of police work.

"I was happy to see those reactions. It's good to give back to the community and show them we're not only here to fight crime, but to help them individually some time," Deputy Jason Arellano said.

That was made clear when deputies stopped three teens walking down the street.

The teens said they hear plenty of negative things about law enforcement.

"I have a lot of friends saying like they don't like police and stuff, the world would be better without them," said one of the teens.

But on this day the three teens left with handshakes and a new view of the men and women behind the badge.

"Ever since today, I guess, I kind of see them in a positive way, doing their job, helping out," one teen said.
Related topics:
stantonanaheimorange countysurprisefeel goodorange county sheriff's department
Copyright © 2021 KABC-TV. All Rights Reserved.
More Videos
From CNN Newsource affiliates
TOP STORIES