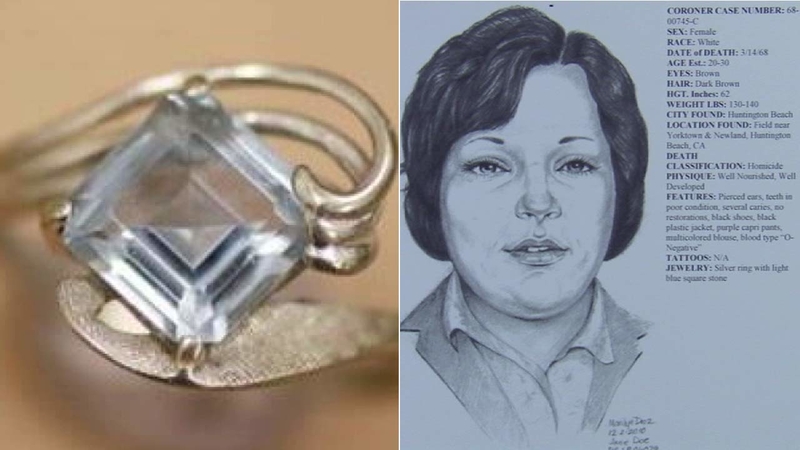 SANTA ANA (KABC) -- Orange County law enforcement released details gleaned from decades of investigation, hoping to get the public's help in identifying a woman who was found slain in Huntington Beach in 1968.

Police held a news conference on Thursday to share information about the case, including a sketch of the woman, only known as "Jane Doe," in hopes of learning her real name.

This case is the oldest unsolved homicide in Orange County to date in which the victim's name is not known.

"She had been beaten severely, her throat had been cut, she was violently sexually assaulted," said Chief Robert Handy with Huntington Beach police.

The body of the woman was discovered by two boys in a field in an agricultural area of Huntington Beach at Yorktown Avenue and Newland Street on March 14, 1968.

One of the boys who discovered the victim's body grew up to be a police officer but has since retired.

Police describe the woman as white or Hispanic, around 20 to 30 years old, 5 feet 3 inches, weighing 140 pounds, with dark, shoulder-length hair. She had no drugs or alcohol in her system.

"She had poor dental health. She had several teeth missing, and other teeth were in a bad state," Handy said.

Detectives believe she may have traveled to Huntington Beach or Long Beach from New York City or from somewhere else on the East Coast.

She was wearing a black plastic jacket, purple capris pants, a multi-colored blouse and black shoes.

"We believe some of that clothing was only available in NYC at the time," Handy said.

She also wore a distinctive silver ring with a light blue square stone.

"The ring is not an expensive ring, but it's unique enough to where someone might recognize it as being belonging to my sister - I gave it to my sister before she left the house that night - that type of thing," said Detective Don Howell with Huntington Beach police.

DNA was collected. The Orange County Cold Case Homicide Task Force, which was formed in 2014, has ruled out dozens of suspects through DNA analysis. But the task force has yet to find a suspect to match the DNA collected from the scene.

Police say they hope a family member may recognize her. If she had children, they would be in their 60s. Detectives say learning her name would put them a step closer to finding her killer.

"The odds are against us certainly, but we don't give up," Handy said.