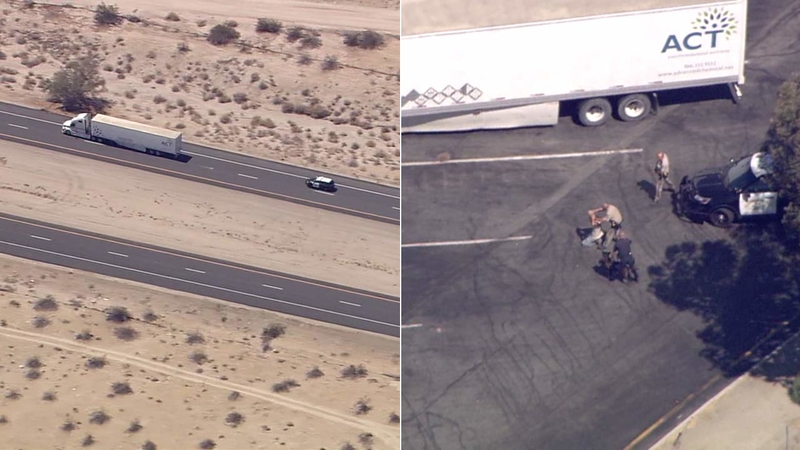 RIVERSIDE, Calif. (KABC) -- Authorities said a driver in a stolen semi-truck led California Highway Patrol officers on an hourslong chase across the Inland Empire on Tuesday.

The chase, which sparked at about 10:30 a.m. in Apple Valley when San Bernardino County sheriff's officials said the driver failed to yield, spanned more than 150 miles and lasted nearly three hours.

"It's a whole different ballgame when you're dealing with a big truck like this," Sgt. Randy Costelow with CHP said.

The truck took off southbound on the 15 Freeway and continued all the way past Box Springs, Riverside and Moreno Valley, at times reaching speeds of up to 70 mph.

The suspect, later identified as 48-year-old James Edgley, drove onto the eastbound 60 Freeway, speeding through Gilman Springs and Beaumont. Edgley later continued onto the 10 Freeway into the Banning area toward Twentynine Palms.

Shortly after 1:30 p.m., Edgley drove the truck off the westbound 10 Freeway into a rest area in Whitewater, where he exited the car and was taken into custody by officers without further incident.

"Through talking with him on the phone, he decided he wanted to turn himself in, and they worked out a deal for him to pull in here and to stop," Costelow explained. "That's when he got out of the vehicle, really without incident, and was taken into custody."

The truck belonged to ACT Enviro, a company that transports hazardous material. According to the CHP, the truck was carrying corrosive oil.

Edgley was booked for felony evading, and possession of stolen vehicle.

"I think he had some personal issues going on that he was talking about both to his negotiator and his daughter," Costelow stated.
Related topics:
apple valleybox springsmoreno valleyriversideriverside countysan bernardino countytwentynine palmsbanningpolice chasechpstolen carfreeway
Copyright © 2021 KABC-TV. All Rights Reserved.
More Videos
From CNN Newsource affiliates
TOP STORIES