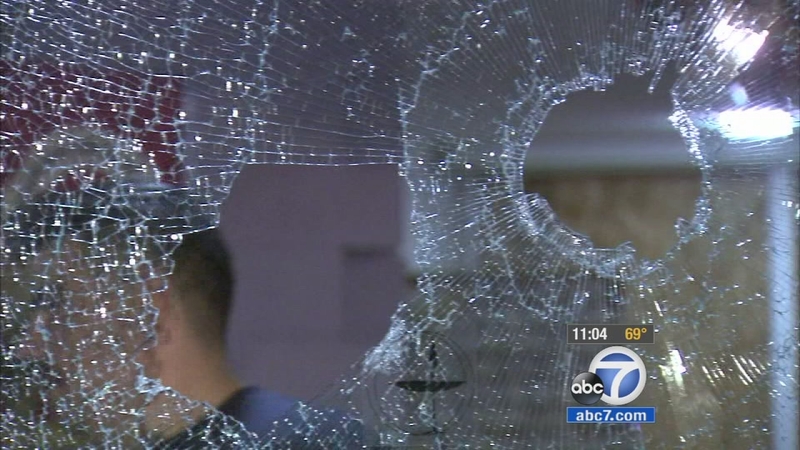 MONTCLAIR, Calif. (KABC) -- An arrest was made Tuesday after a Montclair church was vandalized.

The vandalism occurred on the property of Monte Vista Unitarian Universalist Congregation.

The suspect was identified as 44-year-old Richard Herrera. Montclair police said the apparent transient was found asleep on a bench behind the property and was covered with fire extinguisher powder.

Nearly every glass door and window was shattered. Dozens of rocks were found in three of the church buildings.

Rev. Ann Schranz says a church employee arrived on the property Tuesday morning and discovered the aftermath. Broken glass and some phone wires were ripped apart.

The church estimates it's tens of thousands of dollars in damages, but they say the biggest hit is the emotional one.

There's a Montessori school on the property that was also damaged.

"It's been very hard, very sad. I feel bad for the children. They love their school and some of them had to see it this morning, so it's very emotional for all of us," said Wendy Mitchell, the school owner.

A fire extinguisher was apparently set off. All the books will have to be cleaned, and more than 40 students won't attend the school on Wednesday.

The church has a liberalist tradition.

"We are supportive of rights and responsibilities for lesbian, gay, bisexual and transgender people," said Schranz.

Many congregants also support the Black Lives Matter movement, but they don't believe this was a hate crime.

"I personally do not believe that that was a factor in this vandalism," said Schranz.

Church leaders say they are just are grateful no one was hurt.

Police believe the suspect was under the influence of a controlled substance. He was booked into jail for felony vandalism and vandalism to a worship facility.
Related topics:
montclairsan bernardino countyarrestvandalismchurch
Copyright © 2021 KABC-TV. All Rights Reserved.
More Videos
From CNN Newsource affiliates
TOP STORIES