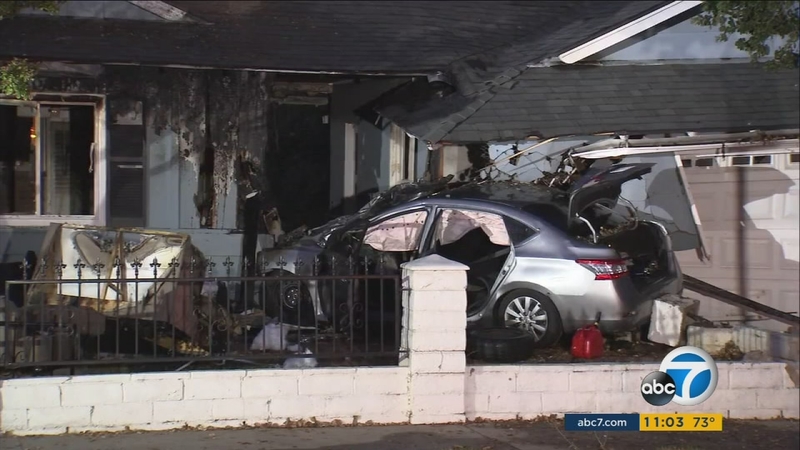 Witnesses told police the suspect traveled at high speeds on the wrong side of the road and ran a stop sign on Glendora Avenue before he turned onto Puente Avenue and plowed the 2014 Nissan Sentra through the kitchen garage of the house.

The impact caused the car to catch fire and flames reached the home. The man was pulled out of his vehicle by good Samaritans who were following him, authorities said.

The driver, identified as a man in his 20s, was transported to a nearby hospital in serious condition and is partially paralyzed, possibly from the neck down. Authorities said he's suspected of driving under the influence.

"I thought it was an earthquake and heard glass. When I went out to my coffee pot to get my coffee, I realize there was drywall at my feet and a big cloud of dust, so then I realized and I heard the man screaming in the car," recalled Robert Bullinger, who lives inside the home.

Bullinger and homeowner Steve Sweeney were not injured. Sweeney described the way the good Samaritans helped everyone involved.

"The young couple were absolutely heroic. The young lady was at the front door helping us find a way out of the house. The young man pulled the driver out of the burning car, and then we both just stood across the street and the fire department was here very quickly, although it doesn't seem like it when you're watching your house burn," he said.

Sweeney said his garage and two front rooms "are toast," and, making matters worse, most of the charred furniture piled up in the front yard was brand new.

Despite the damage and cleanup, both men have a sense of sympathy for the suspected DUI driver. They said they're recovering alcoholics themselves.

"I'm 18 years sober. That could have been me 18 years ago. His life is basically over as he understood it," Sweeney said. "You can't hold any malice, he's a sick individual and there's going to be a penalty in his life for this."

Red Cross officials were called to help the residents of the house, which fire officials said was red tagged.