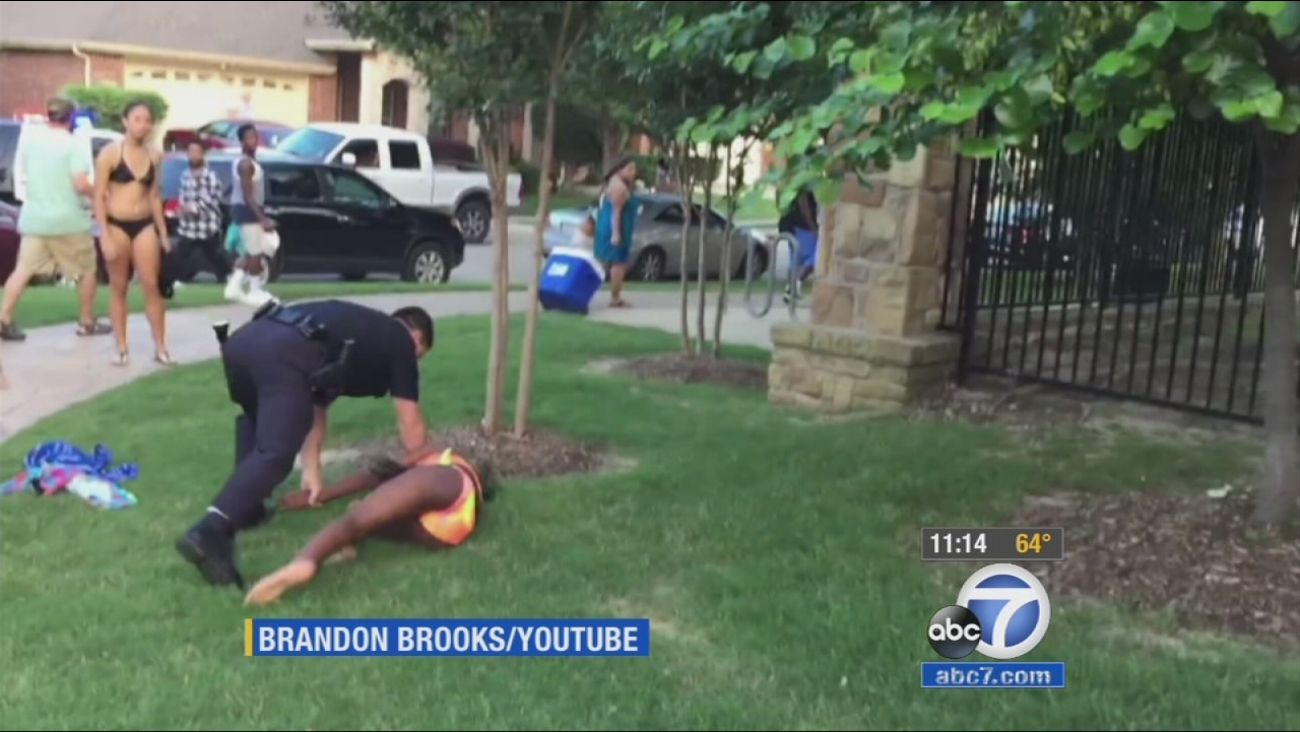 A suburban Dallas police officer has been placed on administrative leave after a video showed him pushing a 14-year-old girl in a swimsuit to the ground outside a pool. (KABC)

McKINNEY, Texas -- A white police officer recorded on video pushing a black girl to the ground at a North Texas pool party resigned from the police force Tuesday.

Officer David Eric Casebolt's actions were "indefensible," McKinney Police Chief Greg Conley said at a press conference after the officer submitted his resignation. But Casebolt was not pressured to quit the force, Conley said.

A teenager at the party posted a video online showing the officer pushing a bikini-clad girl to the ground and brandishing his gun to other black teens when officers responded last Friday to calls about the pool party at a community-owned McKinney swimming pool. The 41-year-old former Texas state trooper and 10-year veteran of the McKinney force was put on administrative leave after the incident. His lawyer, Jane Bishkin of Dallas, confirmed Tuesday he had quit the force.

Conley said a review of the incident video showed that "our policies, our training and our practices do not support his actions."

Twelve officers responded to the report of fights and a disturbance at the pool party at the Craig Ranch North Community Pool in an affluent area of western McKinney. "Eleven of them performed according to their training," Conley said. Casebolt did not, he said.

Casebolt's actions are under investigation and no decision has been made whether charges will be filed against him, Conley said. Charges of interfering with an officer and evading arrest against the only man arrested during Friday's incident have been dropped, Conley said. Everyone else detained was released.

Bishkin declined to say where Casebolt is now and said the officer had received death threats. The attorney said she would release more information at a news conference Wednesday.

The incident prompted criticism of the affluent suburb of McKinney north of Dallas, which is among the nation's fastest growing cities, has highly regarded public schools and was ranked by one publication as America's best place to live.

People who demonstrated this week at a McKinney school compared the city to Baltimore and Ferguson, Missouri, where use of force by police triggered widespread protests and violence.

The resignation is a step in the right direction, said Dominique Alexander, president of the Dallas area-Next Generation Action Network and organizer of the demonstrations.

"We still need a serious investigation into the charges that need to be brought against him in this matter," Alexander said, adding that Casebolt should be drug tested.

The NAACP is asking the U.S. Department of Justice to review the procedures of the McKinney police force, stopping short of asking for a formal investigation. A review of department policies is needed to ensure officers are responding appropriately to calls involving minorities, the local NAACP chapter said.

Casebolt had been accused of excessive force in a 2007 arrest as part of a federal lawsuit that named him along with other officers. The officers arrested Albert Brown Jr., who authorities said was found with crack cocaine during a traffic stop. Brown, who is black, accused the officers of forcibly searching him after pulling down his pants and slamming his head against a car hood. A defense attorney denied Brown's accusations. The lawsuit was dismissed in 2009.

The city of McKinney also has been the target of a lawsuit accusing it of racial segregation in public housing.

A lawsuit in 2008 accused the McKinney Housing Authority of restricting federally subsidized public housing for low-income families to older neighborhoods east of U.S. 75. The lawsuit said that in the Dallas area, 85 percent of those receiving so-called "Section 8" housing vouchers are African Americans.

The lawsuit was settled in 2012 with a consent decree, which is an agreement to take specific actions without admitting guilt.

The scrutiny contrasts with McKinney's high ranking for its quality of life. A Time Inc. publication last year said the city was the best place to live in America, with a median family income in excess of $96,000 and job growth projected at 13 percent. Crime is comparatively low and like other metropolitan suburbs in Texas, McKinney has seen unprecedented expansion. Its population has tripled in the last 15 years to approximately 155,000. About 75 percent of residents are white while nearly 11 percent are black.
Related topics:
texasu.s. & worldpolice
Copyright © 2020 by The Associated Press. All Rights Reserved.
More Videos
From CNN Newsource affiliates
TOP STORIES