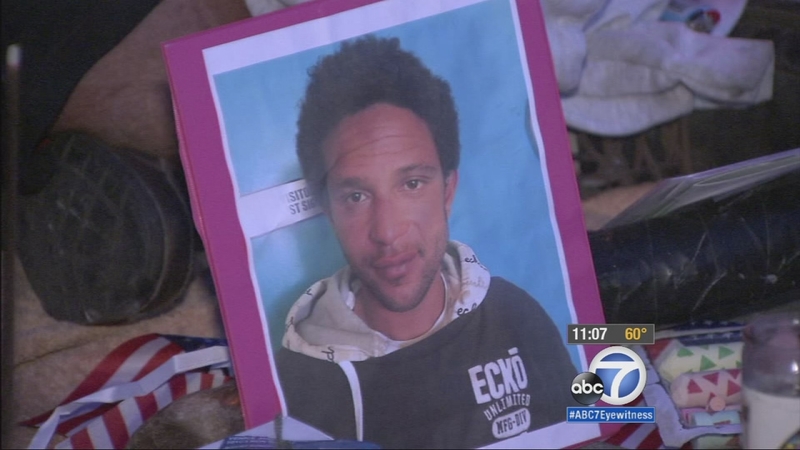 Transient shot to death by LAPD in Venice after altercation

VENICE, LOS ANGELES (KABC) -- A transient man was shot to death in Venice by Los Angeles police responding to a report of someone "disturbing the peace."

The man, identified as Brendon Glenn, was described as a black male in his mid-to-late 20s. The officer who shot the suspect is also black, LAPD Cmdr. Andrew Smith said.

The shooting occurred near Pacific and Winward avenues around 11:30 p.m. Tuesday just a block or so away from the beach.

Two LAPD officers responded to the scene after people called police saying a man was causing a disturbance outside of a bar. Friends of the suspect say he was panhandling, but police said he was disturbing the peace.

After officers spoke with the suspect, he walked away in the direction of the boardwalk.

A short time later, the officers "observed the suspect physically struggling with an individual on the sidewalk west of their initial location," LAPD said in a statement. The responding officers made contact with the suspect, and at some point, there was a struggle between the man and the two officers. That's when the shots were fired.

The officer who shot the suspect, described by police as a veteran of the force, was on crutches after injuring his knee during the incident.

"Clap, clap, and I was like, 'What was that?' And all I see is this dude fall to the ground," described Dylan Andre, a witness.

Andre was standing near the scene of the shooting, but he said he never heard or saw any scuffle before hearing the gunshots.

"When I heard the clap, it sounded like it came from far left, but it was right in front of me," Andres said.

William Henson, a friend of the suspect, said the man was still alive and asking for help after he was shot. The suspect was transported to an area hospital, where he was pronounced dead shortly after midnight.

Henson described the man as a lost soul.

"He was a recovering crackhead for 13 years, came out here, got real bad on alcohol, but if he wasn't on alcohol, he was OK," Henson said.

Don Wige, who lives on the streets, also knew the suspect.

"He had a lot of anxiety inside of him and frustration. He couldn't understand why the world was so negative," Wige said, adding that the suspect's size and strength could easily look threatening.

"But then again, that's not a reason to kill somebody because they look threatening," Wige said. "They could have shot him in the arm. They could have Tasered him. They have so many options to handle the situation, but they immediately go to the extreme which is the gun."

LAPD Officer Meghan Aguilar said police protocol is to use the least amount of force necessary to control the situation. She said she doesn't know why a Taser was not used in the incident.

The two officers involved in the shooting were not wearing body cameras, and there was no dash camera on their vehicle. However, police said they will retrieve surveillance video from the surrounding area that they believe captured the shooting.

LAPD Chief Charlie Beck spoke at a news conference held Wednesday afternoon and said surveillance video shows the officer and suspect in a scuffle. He also said the department will thoroughly investigate the situation.

The injured officer is on medication and has yet to be interviewed by investigators about the shooting, Beck said. Both officers involved in the shooting have been taken off the street and will remain off patrol pending the outcome of the investigation.

Authorities said a suspect weapon was not found at the scene. The shooting remains under investigation.

Beck said a town hall meeting is scheduled at the Pacific Division Station involving the LAPD and political leaders on Thursday.