KABC
By ABC7.com staff
LOMPOC, Calif. (KABC) -- A Ventura County firefighter died in the line of duty while working on the Canyon Fire near Lompoc Wednesday morning.

Authorities said around 6:20 a.m., a water tender truck was traveling westbound on State Route 246, approaching a roundabout on Purisima Road. The driver ended up hitting a curb on the roundabout, causing the truck to rollover. The driver was taken to a hospital for minor injuries.

The fire engineer, identified as Ryan Osler, was the passenger in the truck and sustained fatal injuries, according to the California Highway Patrol.

CHP officers with the Buellton Station are investigating the crash.

Osler had been with the fire department for 18 years, beginning his career in 1998 as a member of the Ventura County handcrew. After serving for six years as a hired trainee firefighter, Osler was promoted to fire engineer at Fire Station 42 in Moorpark.

"Our collective hearts are broken at the loss of our friend and brother Ryan. Our thoughts and prayers go out to his family," VCFD Fire Chief Mark Lorenzen said. "We are deeply moved by the outpouring of public support for Ryan and on behalf of all the men and women of the Ventura County Fire Department, we thank you for your continued prayers."

On Wednesday afternoon, there was a procession of fire vehicles that accompanied Osler's body from the coroner's office in Santa Barbara to a funeral home in Camarillo. Several overpasses were lined with fellow firefighters.

Flags were ordered at half-staff after news of Osler's death, and mourning bands will be worn on firefighter badges. Osler is survived by his wife and two children.

The three-person crew at Fire Station 42 was pulled from duty to meet with critical incident stress workers. Capt. Ron Oatman not only knew Osler, but worked with his father, who also was a Ventura County firefighter.

"He would step up and volunteer, but at the same time, he wouldn't be afraid to say, 'Nope, it's time to go home, spend some time with the family,'" Oatman said.

The two firefighters were providing help in the Canyon Fire, which erupted in a remote canyon near the Vandenberg Air Force Base on Sunday. The wildfire has grown to more than 12,000 acres, or 19 square miles, and is 45 percent contained.

More than 1,000 firefighters are battling the blaze. Voluntary evacuations were also ordered for about 400 residents in San Miguelito Canyon. 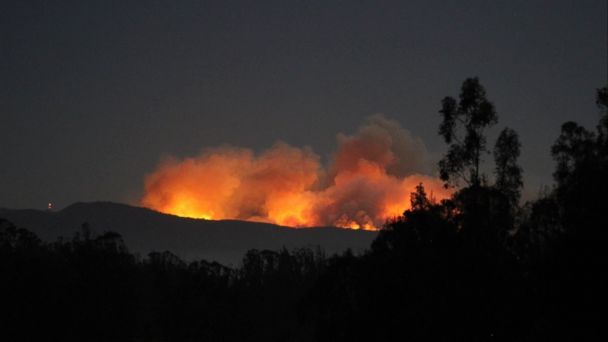