What we know about OJ Simpson's life going forward 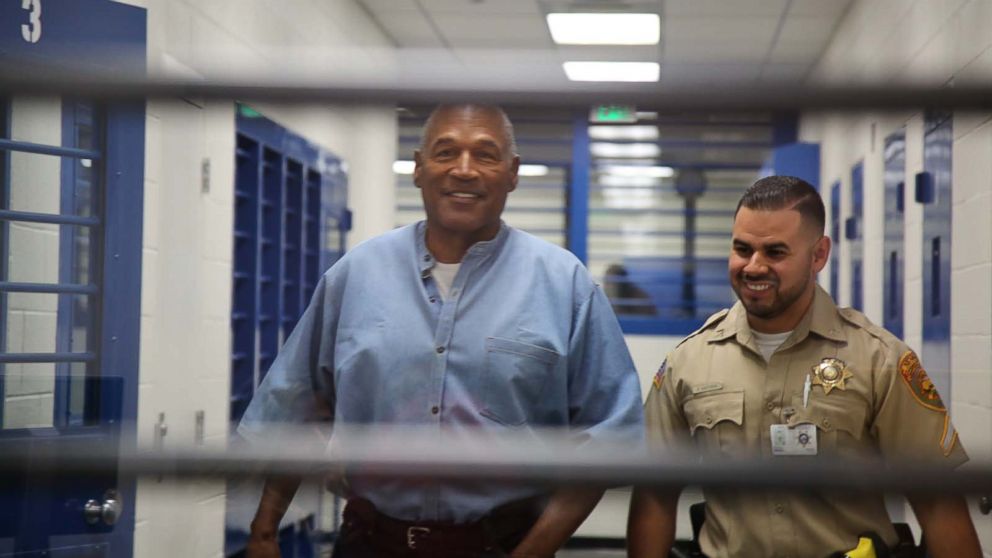 After being granted parole today following nine years in prison for a Las Vegas robbery, O.J. Simpson will soon be a free man.

The imprisoned former NFL player could be released from Lovelock Correctional Facility in Nevada as early as Oct. 1.

Simpson's remaining time in prison should continue as usual, an official said today, and officials will work on developing his release plan; however, he could potentially be moved to another facility as he approaches his release date.

Upon his release, the 70-year-old is requesting to live in Florida, where he has family as his support system, officials said today.

"Stay in Nevada? I don't think you guys want me here," Simpson quipped to the parole board.

Simpson told the commissioners today that he's missed a total of 36 birthdays with his children while behind bars, and hasn't been there for their college graduations. If he were to be paroled, he said, he wants to spend as much time as he can with his family.

Simpson's eldest daughter, 48-year-old Arnelle Simpson, spoke at the parole hearing today, appearing emotional and telling the board the family wants him home so they can move forward.

"We are aware of his potential relocation to Florida. Pursuant to the Interstate Commission on Adult Offender Supervision, if Nevada's request meets all criteria, Florida must accept the transfer," Michelle Glady, Director of Communications with the Florida Department of Corrections, said in a statement. "As is the case with any offender who transfers under this routine procedure, he will be assigned a Florida probation officer and will be supervised in accordance with the conditions of his parole."

Officials said today that while Simpson would report to a Florida probation officer, Nevada is still the authority in his case -- so if he violated his parole, he would have to answer to Nevada officials.

Simpson was sentenced to prison following an arrest in 2007 during a botched robbery in Las Vegas, when he led a group of men into a hotel and casino to steal sports memorabilia at gunpoint. He contended the memorabilia and other personal items belonged to him.

Simpson delivered a rambling account of the case to the parole board earlier today, maintaining that he didn't intend to steal anything that night and that he "wish[es] this would have never happened."

Over 20 years ago, Simpson went on trial for the killing of his ex-wife, Nicole Brown Simpson, and her friend Ron Goldman. The two were stabbed to death on June 12, 1994, at her Los Angeles home. On Oct. 3, 1995, at the end of a televised trial that captivated the nation, Simpson was acquitted of all criminal charges. He has always maintained his innocence.

"What's troubling to me is not only him, but the whole system gives second chances to violent felons or, for that matter, anyone in jail... Ron doesn't get a second chance," he said.

"Ron never gets to spend his life doing what he wanted to do," Goldman continued. "We'll never get to share his life, and the killer will walk free and get to do whatever he wants."

Fred Goldman said the parole board should take into account that Simpson was found liable for the killings in the 1997 civil trial.

"I think his whole history of violence, ignoring the law, no respect for the law, no remorse for virtually anything he's ever done is an indication of who he is as a person," Goldman said. "I don't think there's any reason to think that he's going to be a decent human being in society. I think he's proved otherwise."

Ron Goldman's sister, Kim Goldman, added, "We lived our life with [Simpson] walking the streets and sharing the same roads that we did."

"With him being locked up in Lovelock, it's been a chance for us to kind of reclaim some control over our life and have some glimpse of sanity," she said. "I'm preparing myself for that to be changing come October."