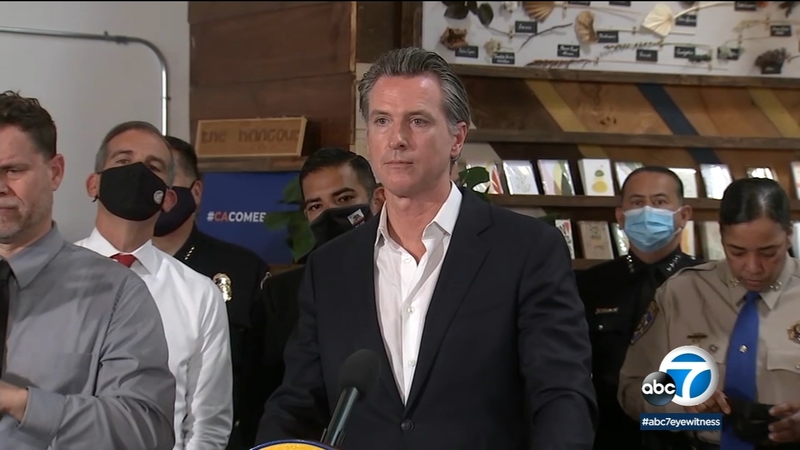 Gov. Gavin Newsom, appearing with local law enforcement officials and mayors, announced new efforts to tackle a sharp rise in retail theft and other crimes that California has been seeing this year.

The press conference comes about a week after a Rite Aid employee was shot and killed while confronting shoplifters at a store in the Los Angeles community of Glassell Park.

Overall, California is experiencing retail crime that is negatively impacting stores in cities such as San Francisco, where police are investigating the brazen robbery of a Neiman Marcus that occurred earlier this month. A bystander's video shows the suspects running out of the department store and getting into waiting vehicles before fleeing.

Newsom met with more than a dozen mayors from throughout the state and signed Assembly Bill 331 to extend and add funding to a crime task force involving the CHP and local law enforcement agencies around the state that focus on organized retail-theft rings.

"This is not new in the state of California ... We've been organized in a very deliberative manner to address the issue of organized retail crime for a number of years. That said, we are doubling down on those efforts today with this bill that I'll be signing here," Newsom said.

The bill extends the existing regional property crimes task force until 2026 and provides it with millions of dollars in additional funding.

The press conference comes about a week after a Rite Aid employee was shot and killed while confronting shoplifters at a Los Angeles area location.

The rise in crime has also become an issue in the recall effort now pending against Newsom. One of the candidates to replace Newsom if the recall succeeds, former San Diego Mayor Kevin Faulconer, blasted the governor for failing to stop the rise in crime, saying his policies have led to lower funding for police departments and early release for prisoners.

"In Gavin Newsom's California, thieves are robbing stores without consequence," Faulconer said in a video he released on Twitter. "People are getting mugged on the streets."

Newsom acknowledged California has seen a rise in crime - but noted the same trend is happening across the country.

"(There's a) big increase in gun-related violence. You're seeing it all across the United States," Newsom said. "There is not a state that has been spared."

"An increase particularly of gun violence over the course of the last year. There are many theories as to the underlying causes as to why and good people can disagree. The bottom line at the end of the day is members of the public - you expect us to resolve to address these issues."

The California Retailers Association reported that Los Angeles, San Francisco and Sacramento register in the top 10 for problems with organized retail crime.

Last month, it was announced that a suspect seen in a viral video of a San Francisco Walgreens heist, who was caught in the act of another alleged attempted theft, is facing 15 criminal charges.
EMBED More News Videos

The suspects are seen running out of the department store with the designer purses in hand.

Target Corp. said San Francisco is the only U.S. city where the retail company has decided to close some of its stores early.

Meanwhile, in Los Angeles, violent crime is on the rise. Police Chief Michel Moore told the Police Commission that the city saw a 50% increase in shooting victims last month, compared to the same period last year.