A Florida couple couldn't extend their trip to see the a Rams game after it was rescheduled due to COVID cases.
KABC
By Ashley Mackey 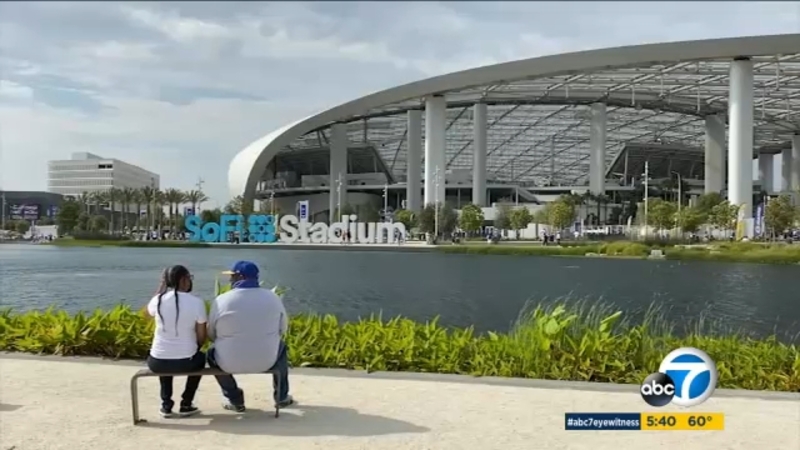 INGLEWOOD, Calif. (KABC) -- Amanda Fitzpatrick and her husband Yusef Abdur-Razaaq planned a weekend getaway to los Angeles a few months ago. They would fly from Florida to LAX, visit the beaches, go to the 'Once Upon A Time' music festival and finish the weekend off with a Los Angeles Rams game in the new SoFi Stadium. However, things didn't go as planned.

"We just were really excited about coming to LA and getting a chance to do all of these things in one weekend," said Fitzpatrick.


The fatal stabbing at the music festival cut the event short, and then the couple found out they wouldn't be able to attend Rams the football game because it was postponed due to COVID.

"We were excited to see that California was strict," Fitzpatrick said. "They have protocols set in place for COVID testing, as well as in some cases, mandatory vaccination cards. So, we thought it was a safe choice to be able to come there and to go to the game."

Fitzpatrick and her husband couldn't extend their trip to see the football game. She says they had already taken off work Monday and they needed to get back to their daughter. Local resident Jason Menadue says he faced a similar dilemma.

"The only reason I'm not attending today's game is because I work today," said Menadue. "I specifically chose those tickets on a weekend because I can attend that game. If I wanted to attend a game during the week I would have bought weekday tickets."

A Los Angeles Rams press release stated, "No refunds will be given for tickets purchased, but any fans who cannot make it to the game are able to transfer or resell their tickets through rams account manager." A Rams official declined to comment further.

Amanda said her tickets were bought through Vivid Seats and Menadue said his were bought through Ticketmaster. Neither were able to get refunds nor were they able to sell their tickets. They both said this situation will make them think twice about plans in the future.

"It's a real turnoff to me," Menadue said. "The possibility of buying not just Rams tickets, but Chargers, tickets, Lakers tickets, Clippers tickets, any of those."


ABC7 reached out to both Ticketmaster and Vivid Seats. Ticketmaster didn't respond with a comment, but Vivid Seats wrote, "In the event of a canceled event, Vivid Seats offers customers a refund of 100% of their order. For postponed events, we follow the policy of the event organizers.

This event was declared a postponed event by the event organizers, the Rams."