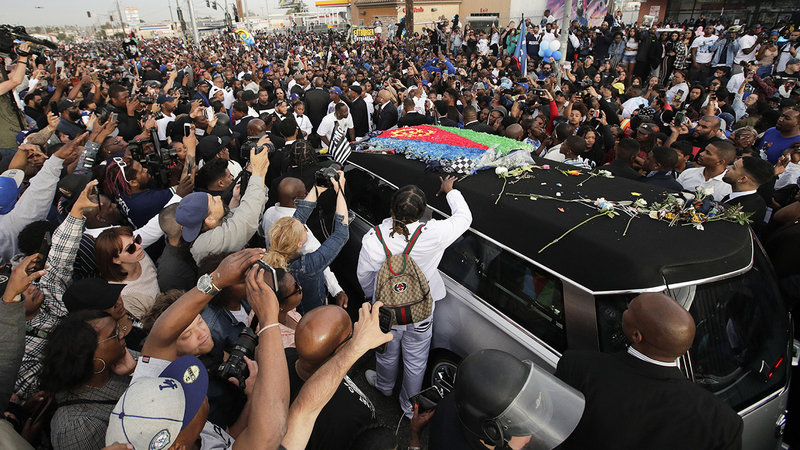 LOS ANGELES (KABC) -- Thousands of people lined the streets of Los Angeles on Thursday for a procession to honor slain rapper Nipsey Hussle.

The 25-mile procession route stretched from near the downtown area into South Los Angeles and past Hussle's Marathon clothing store. It ended at the Angelus Funeral Home, where crowds of people swarmed the hearse to pay their respects.

The largest concentration of crowds were in front of the store, the site of his shooting.

Hussle was shot and killed in front of his store March 31. Police have arrested Eric Ronald Holder, 29, in the shooting, saying it was the result of a personal dispute between the two men.

Although there were huge crowds expressing their emotions, the day remained peaceful aside from a few minor incidents.

At a few points, people in the crowd panicked, causing brief moments of chaos and at least one stampede.

No serious injuries were reported during the event. A heavy police presence was on hand to ensure crowd control.

"Everybody thinks we're acting crazy but this is just people pouring out their passion. Some of us couldn't go to the funeral. I was at work all day, so this is all I get, you know what I mean? So, all love," shared fan Jmarah Major.

During one stampede near Slauson and Crenshaw, dozens of people suddenly started fleeing a disturbance in the crowd.

During the Nipsey Hussle memorial, there was a stampede near Slauson and Crenshaw, where dozens of people suddenly started fleeing a disturbance in the crowd.

One witness told ABC7 that it was caused by a confrontation between a person in the crowd and a police officer. When the officer began reaching for handcuffs, the crowd suddenly panicked and started moving away, triggering others to flee as well.

LAPD said they believed a loud noise may have contributed to the incident.

UPDATE: At this time we believe a loud noise startled the crowd at the intersection of Slauson and Crenshaw. We understand emotions may be running high, but we are asking all attendees to remain calm and continue to peacefully mourn as the Nipsey Hussle procession approaches.

The Los Angeles Fire Department reported treating 15 patients for medical issues related to the event and five of them were transported to local hospitals. The LAFD also said some power lines were taken out along the procession route because of Mylar balloons.

After the procession had passed by the area, a shooting was reported in the Watts neighborhood. One person was killed and four others were wounded in the shooting at 103rd and Main streets.

Police did not believe the shooting was directly related to the events of the procession.

Police in riot gear here. At one point everyone was chanting Nipsey. @ABC7 pic.twitter.com/9e7okZVQIF

As the hearse and procession moved through the city, gridlock ensued in some neighborhoods. Police were able to open up some pathways for traffic but other streets were blocked off by the crowds.

At one point, crowds were also standing on police cars and news vans to watch the procession go by. One police car was tagged with graffiti that read "Nips in Paradise."

Crowds stood on police cars to watch the Nipsey Hussle procession, and one cruiser was tagged with "Nips in Paradise" graffiti.

During the procession, passengers in one vehicle began throwing money out the window, bringing some bystanders into the street.

The crowd, for the most part, was peaceful at the end of Nipsey's final victory lap.

"Look at everybody, look at all these black people together with no drama, no issues, no fighting, no anything. It's a beautiful situation," said rapper Kboy.

The LAPD and the Nation of Islam said they will remain near The Marathon store through the night to keep the peace.