Security was tight at the 21,000-capacity arena in downtown, where the celebration of life event began shortly after 11 a.m.

The private funeral service for Hussle will be held Friday afternoon at Forest Lawn Hollywood Hills.

Thousands of people honored the slain rapper Nipsey Hussle at a memorial service Thursday morning at Staples Center, followed by a 25-mile procession through his native South Los Angeles.

Former President Barack Obama remembered Nipsey Hussle as an "an example for young people to follow" and recognized his legacy of service during Thursday's memorial honoring the slain rapper.

"I've never meet Nipsey, but I've heard his music through my daughters, and after his passing I had the chance to learn more about his transformation and his community work. While most folks look at the Crenshaw neighborhood where he grew up and only see gangs, bullets and despair, Nipsey saw potential. He saw hope. He saw a community that even through its flaws taught him to always keep going. He choice to invest in that community rather than to ignore it," the Obama letter read. "He set an example for young people to follow and is a legacy worth of celebration. I hope his memory inspires more good work in Crenshaw and communities like it. Michelle and I send our sympathies to Lauren, Emani, Kross and his while family and to all those who love Nipsey."

Snoop Dogg's words to immortalize his friend Nipsey Hussle were both serious and silly, as he told old stories about Hussle and their brotherhood.

Hussle's mother, Angelique Smith, spoke of finding peace through her pain, referring to her son by his given name.

"My son, Ermias Joseph Ashgedom, was a great man," she said.

The slain rapper's girlfriend, Lauren London, spoke about Hussle as a one-of-a-kind man.

"Ermias used to say that you can't possess people, you experience them, and I am so honored and blessed that I got to experience such a man," she said.

A hearse carrying Hussle's coffin traveled from an intersection near USC and made its way into the neighborhood where Hussle's The Marathon clothing store is located in a strip mall. The procession, under the watchful eye of Los Angeles Police Department officers, traveled to its destination at a funeral home in the Crenshaw District.

The procession was lined by thousands of mourners and fans throughout the route. Although there were huge crowds expressing their emotions, the day remained peaceful aside from a few minor incidents.

At a few points, people in the crowd panicked, causing brief moments of chaos and at least one stampede. No serious injuries were reported during the event.

A brief stampede broke out amid the procession for Nipsey Hussle but no serious injuries were reported.

The 33-year-old Hussle was fatally shot March 31 while standing in front of his South L.A. store near the intersection of Slauson Avenue and Crenshaw Boulevard. 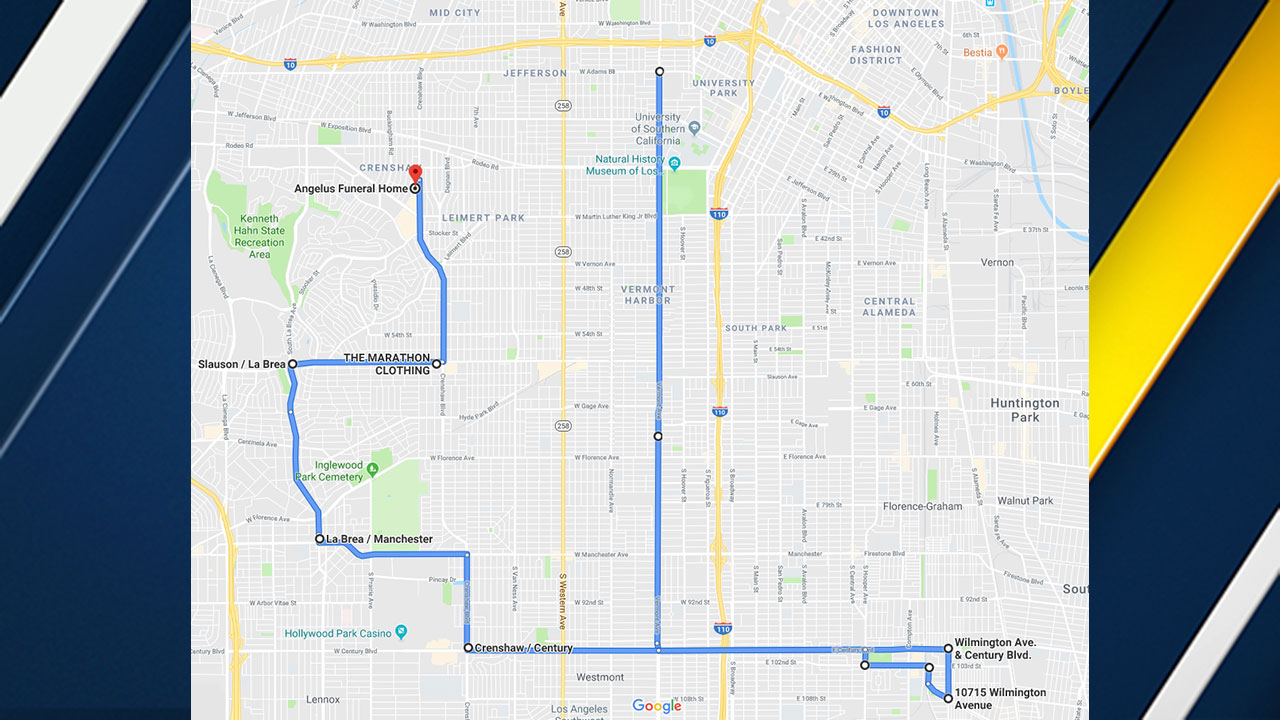 Staples Center released this map of the public procession that will follow Nipsey Hussle's Celebration of Life which starts at 10 a.m. on Thursday, April 11, 2019.

Police later arrested Eric R. Holder Jr. as the suspect in Hussle's killing. Holder, who has pleaded not guilty in the case, allegedly had a personal dispute with Hussle that culminated in the deadly shooting.

Hussle, an Eritrean-American whose real name was Ermias Asghedom, was a father of two who was engaged to actress Lauren London. He had recently purchased the strip mall where The Marathon is located and planned to redevelop it into a mixed-use commercial and residential complex.