KABC
LOS ANGELES -- Passengers riding as part of rapper Nipsey Hussle's funeral procession tossed money out of the window of their vehicle, prompting some bystanders to walk into the street in an attempt to collect the bills as the procession passed.

Bills could be seen on the ground as the motorcade left the Staples Center and traveled beneath the 110 Freeway toward Pico Street en route to South Los Angeles. The money was thrown out of the second or third vehicle in the motorcade behind the hearse, though it's not clear who was riding in those vehicles.

Hussle's body was being carried in a silver hearse that is flanked by motorcycles - both those of police and bikers and ATVs. A crowd of people briefly blocked the procession before the hearse was able to find an opening and pull through.

The 25-mile procession will wind its way through the streets of South Los Angeles, including a trip past Hussle's clothing store, The Marathon, where he was gunned down March 31.

Hussle's legacy as a persistent rapper, community activist, uniter, a doting father, a protective sibling and a loving son were underscored earlier in the morning at a public memorial service, with deeply personal testimonies from those closest to the rapper, including his actress-fiancee Lauren London, collaborator and dear friend Snoop Dogg and his mother, who said she was at peace with the death of her "superhero" son.

Beyonce and Jay-Z were among the big-name celebrities who attended the three-hour event in Los Angeles at the Staples Center, where the last celebrity funeral held at the concert arena was Michael Jackson's in 2009.

The arena was packed with more than 21,000 fans and drove home the important impact Hussle - just 33 when he died - had on his city and the rest of the world.

Angelique Smith, the mother of Nipsey Hussle, speaks at his memorial service accompanied by the slain rapper's father, Dawit Asghedom. 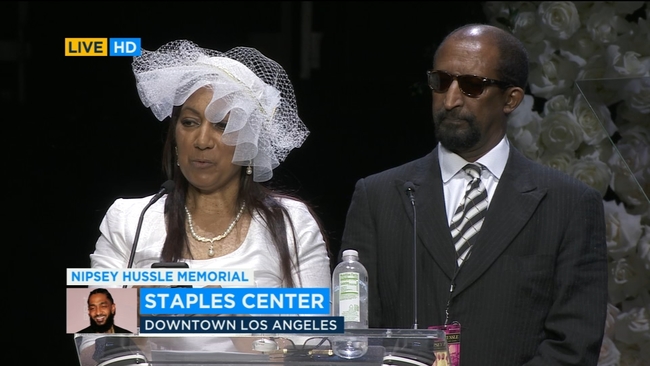 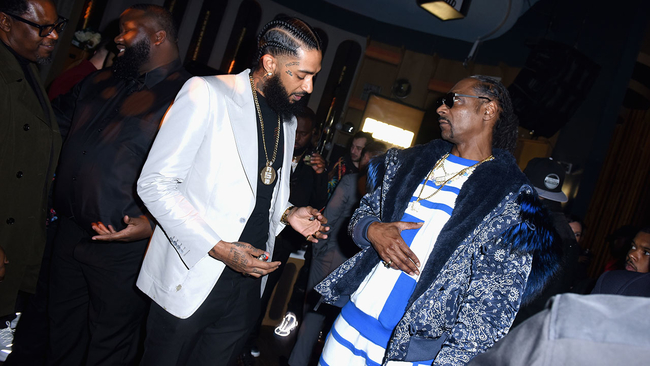