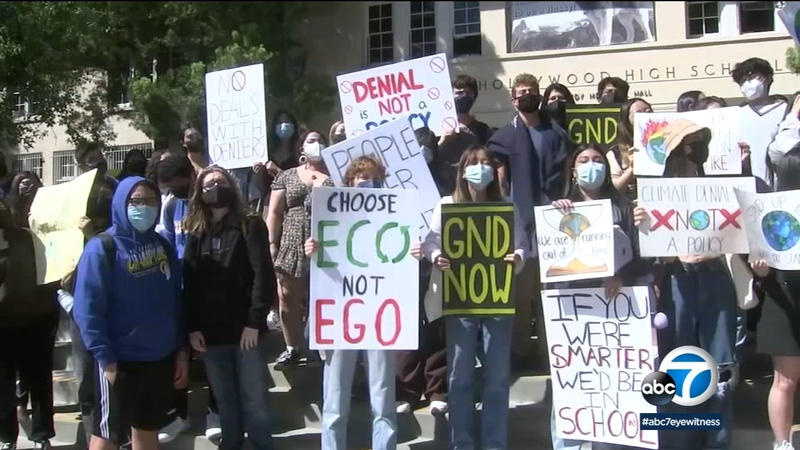 NORTH HOLLYWOOD, LOS ANGELES (KABC) -- About 100 North Hollywood High School students walked out of their classrooms Friday morning to protest inaction on climate change, joining thousands across the world to call on governments to do more to protect the environment and prevent global warming.

Student Themi Pereia walked out with her fellow students and protested at the campus' front steps, chanting "What do we want?! Climate justice!" and holding up signs that read "Denial is not a policy" and "People over profit."

"We are worried that climate change will reach a point where we cannot stop it," Pereia said. "In about five years we will reach thresholds where we will not be able to stop uncontrolled warming, and we want politicians to take action before we hit that point."

The students' protest was part of the global youth climate strike. Thousands of people marched through Rome and other major cities around the globe urging for climate action and demanding an end to dependence on fossil fuels.

The global climate strike is tied to the grassroots Fridays for Future movement, inspired by teenage environmental activist Greta Thunberg.

"We believe that corporate greed has gone too far and climate change needs to be stopped now before it's too late," North Hollywood High School student Wesley Icken said.

Students also showed up at a rally held in downtown Los Angeles at City Hall.

The World Health Organization reports climate change is expected to cause approximately 250,000 additional deaths per year between 2030 and 2050.

"We're tired of local politicians, national politicians not standing up for us and our future. We inherited a burning world," North Hollywood High School student Vivienne Bridges said. "We're expected to pick up the pieces and it's not fair. This is not our responsibility, but we've had to assume it because no one else is willing to."