The North Valley Broncos were the first all-Black baseball team from Pacoima to make it to Little League World Series in 1965.
KABC
By Amanda Palacios 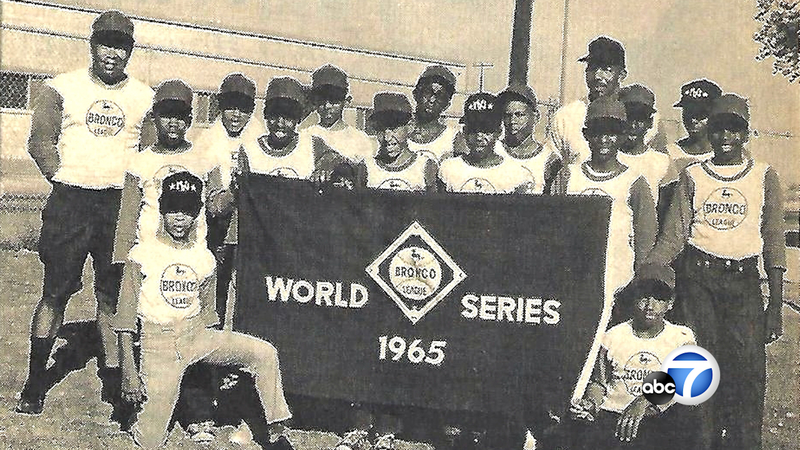 PACOIMA, LOS ANGELES (KABC) -- During the '50s and '60s, little league baseball was an entirely different ball game. According to the Pacoima Historical Society, baseball teams in Pacoima and other parts of the San Fernando Valley were segregated.

It wasn't until 1963, a non-segregated league was created.

The North Valley Broncos team started when a group of fathers got together and leased a plot of land near the Hansen Dam for $1 a month, so the kids had a field to practice on.

"They just got together and put together a winning team," said North Valley Broncos player Rickie Chapron.

"We just prevailed and we couldn't stop winning," said Chapron.

USC Hall of Fame running back, Anthony Davis, was part of the North Valley Broncos. He said when the team traveled for games, they didn't always have a place to stay.

"We stayed in the gym, we slept on the floor and I found it being very rough as an almost 12-year-old kid," said Davis.

Chapron says many parents couldn't travel with them to away games because they couldn't afford to take time off from work. He recalls receiving a money order from his dad when he was in Massachusetts.

The team did not advance to the championship game, but being a part of history is something they say they'll never forget.

"Back then I said, 'You know what, this is going to make history isn't it by us being an all-Black team and being way out here,'" said Chapron.

"The legacy of us from the North Valley is very monumental ... it happened in little Pacoima, 15 miles out of Los Angeles, LA County, an all-Black team," said Davis