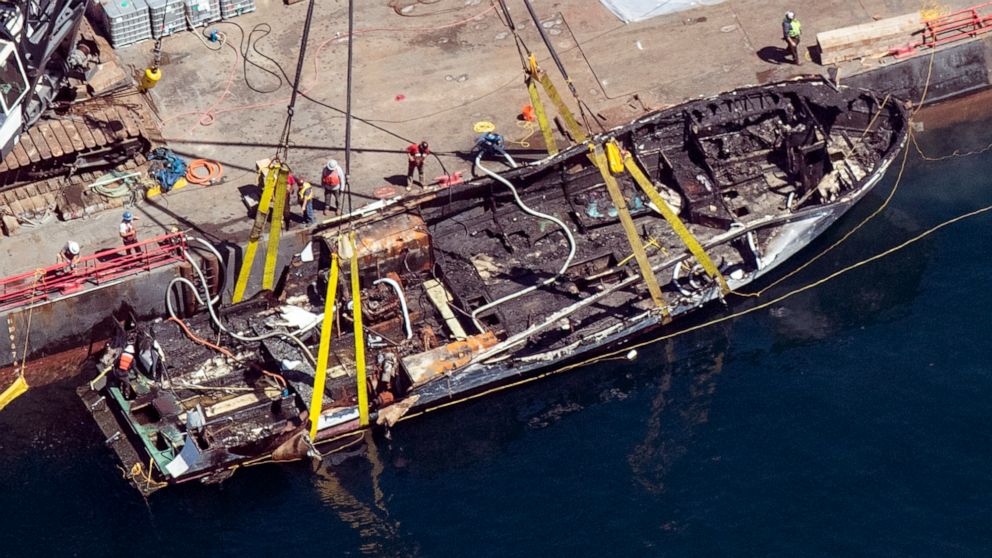 In a preliminary report on the Southern California blaze that erupted on an anchored dive boat and killed 34 people, federal investigators revealed that surviving crew members told them there were no known mechanical or electrical issues with the vessel, and that smoke detectors sounded in the below-deck bunkroom where the victims were sleeping.

The National Transportation Safety Board released the preliminary report on Thursday, a day after divers recovered the body of the final missing victim of the disaster.

The report indicates that there was no night watchman roaming the three-deck vessel when it caught fire, which U.S. Coast Guard officials said is a maritime requirement.

"At the time of the fire, five crewmembers were asleep in berths behind the wheelhouse, and one crewmember was asleep in the bunkroom, which was accessed from the salon down a ladder well in the forward, starboard corner of the compartment," the report states.

The owner of Truth Aquatics, the Santa Barbara company that operated the doomed boat called the "Conception," had no immediate comment.

"For the integrity of this investigation, the operator of Truth Aquatics, Glen Fritzler, is not able to speak to the media at this point in time. I can personally confirm that Glen, his family and his team are reeling from this tragedy and doing everything in their power to support the investigation into the cause and origin of this horrendous fire and find answers for the victims and survivors," the company's lawyer, Douglas Schwartz, said in a statement on Thursday to ABC News.

Schwartz disputed the preliminary report's finding that all crew members were asleep at the time of the fire.

"We do have witness testimony that seems to contradict the notion that the entire crew was asleep," Schwartz said. "We do know that one crewmember checked on and around the galley area at around 2:30 a.m., approximately 30 minutes before the fire broke out."

Salvage teams were working Thursday to raise the doomed 38-year-old wood and fiberglass vessel from 60 feet of water so investigators can closely inspect it as part of their probe to determine what sparked the Labor Day blaze and if any criminal charges are warranted.

NTSB officials said the investigation could take 12 to 24 months, but they are "100% certain" they will determine the cause of the fire.

The Santa Barbara County Sheriff's Office announced via Twitter Wednesday that divers had found the last missing victim and that all 34 bodies had been pulled from the submerged wreckage.

During a press conference Thursday, Santa Barbara Sheriff Bill Brown confirmed that DNA testing was used to identify 33 of the victims, while one had to be identified from fingerprints. Authorities are working to collect DNA from a family member overseas to get additional verification for that victim.

The sheriff also released the identities of all 34 victims, who range in age from 16 to 62:

There were 39 people aboard the 75-foot vessel when it burst into flames before dawn on Sept. 2 near the Channel Islands, miles off the coast of Santa Barbara. Five crew members, including the captain, were on the top deck and jumped overboard and survived. The 34 others, including one crew member, were apparently sleeping below deck and became trapped when flames blocked both a stairway and an escape hatch, according to the sheriff's office.

Three crew members interviewed by NTSB investigators "revealed that no mechanical or electrical issues were reported," according to the NTSB preliminary report.

"A crewmember sleeping in the wheelhouse berths was awakened by a noise and got up to investigate. He saw a fire at the aft end of the [top] sun deck, rising up from the salon compartment below," according to the report. "The crewmember alerted the crew behind the wheelhouse. As crewmembers awoke, the captain radioed a distress message to the Coast Guard."

The crewmembers told investigator they and the captain, Jerry Boylan, made several attempts to reached the people trapped in the below deck bunkroom but were beaten back by flames, according to the report. They were able to launch a small skiff to pluck two crewmembers from the water, the report says.

The burning boat sank in about 60 feet of water and overturned as firefighters battled the flames. A day later, the U.S. Coast Guard called off the search for possible survivors, shifting its efforts to search and recovery.

The NTSB sent a 16-member investigative team to the scene last week. They are collecting evidence and expected to interview the crew, witnesses and first responders, according to NTSB member Jennifer Homendy.

During an interview with ABC News last week, Homendy said the crew members tried to get to the passengers sleeping below deck but were pushed back by fierce flames. They then went to the front of the ship and tried to break through its windows. When that didn't work, they ultimately had to look out for their own safety.

"At some point because of heat, smoke and fire they had to jump off the boat," she said.

The boat was required to have smoke detectors, fixed firefighting equipment in the engine room and fire extinguishers throughout, including ones at the front and rear of the vessel, according to Capt. Monica Rochester of the U.S. Coast Guard, who told reporters last week that all the required firefighting apparatus was accounted for during the most recent inspection.

The preliminary report indicates the crew did not use the firefighting equipment before jumping overboard.