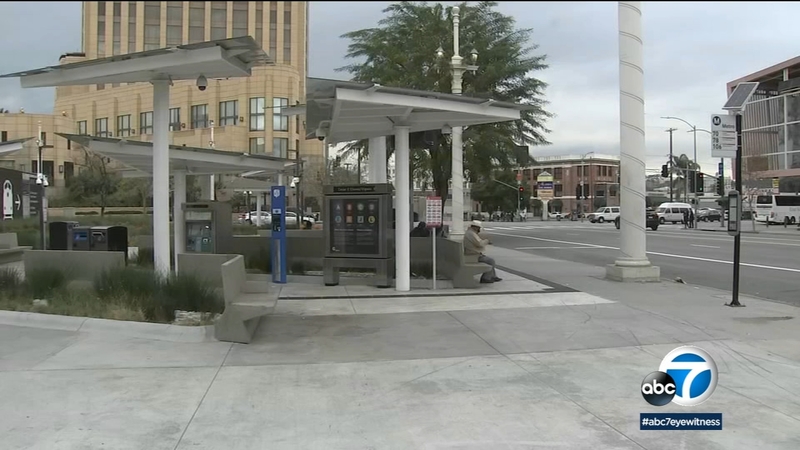 LOS ANGELES (KABC) -- Police are investigating an assault on a nurse waiting at a bus stop in downtown Los Angeles Thursday morning at the hands of a transient, according to the Los Angeles Police Department.

It happened at about 5:15 a.m. at the bus stop located near the corner of Cesar Chavez and Vignes Street, according to LAPD. A man in his 40s was taken into custody and booked for attempted murder, police said.

LAPD says the woman, an L.A. County nurse in her 60s, was assaulted by a transient and taken to the hospital where she was listed in critical condition. Authorities noted a homeless encampment nearby but police are still looking into whether the man in custody lives there.

A concerned mother who was waiting for the bus with her daughter told ABC7 that safety is what she worries about when she's at the bus stop waiting to catch a bus.

"My concerns is safety issues. A lot of homeless people are out here harassing the patrons waiting for the bus. It's unsafe. They're down here trying to rob us, rape us, anything they can do, they're yelling at us, it's a lot of mental health. And I think that law enforcement needs to come out and kind of, address these issues, to make the city more safe" said Braneka Wilson.

L.A. Metro released a statement regarding Thursday's assault that reads in part:

"Metro is appalled upon hearing of this incident. Metro's highest concern is the safety of our customers, and along with our law enforcement partners, we have zero tolerance for crimes committed against our customers. Perpetrators will be aggressively investigated and prosecuted to the greatest extent of the law. We urge our customers to help us keep the Metro transit system safe by reporting public safety incidents. Customers can use Metro's Transit Watch App, call 888-950-SAFE (7233), or text 213-788-2777. For emergencies, call 911. Working together, we can all help ensure a safer and more secure Metro system."