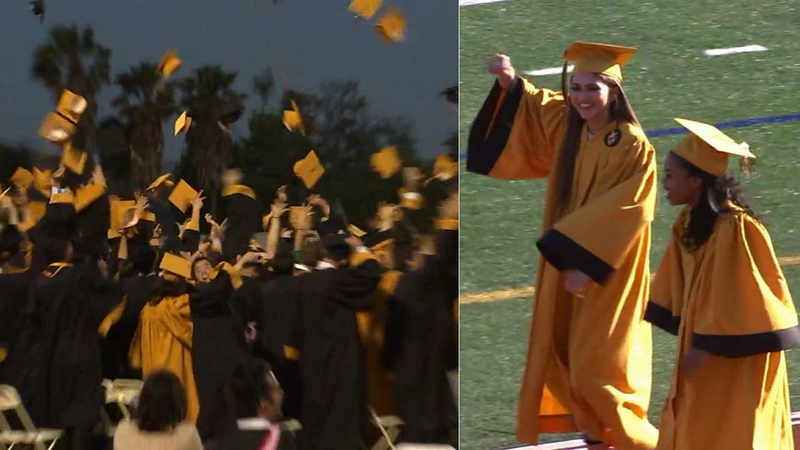 Actor and comedian Bob Newhart served as the commencement speaker at the star-studded ceremony Thursday. Parents who attended the graduation know him from "Newhart," kids know him from "Elf," but graduate Taylor Bongiovi knows him as grandpa.

"Keep your sense of humor. Follow your dream. I did and I've been lucky," he told the graduating class.

Gabrielle Douglas was one of the graduates. Her mom, Natalie Hawkins, says Douglas was doing homework while also winning an Olympic gold medal in gymnastics in London. She's now training for another.

"It's been so crazy just to even get the schoolwork done," Hawkins said.

The Oak Park Unified School District has a special program that allows students to be tutored at home, on set, at the gym and still be part of the big graduation ceremony with everybody else.

"I think it's important to our community that we come together to celebrate the achievement of everyone," said Kevin Buchanan, principal of Oak Park High School.

Actress Zendaya Coleman also walked across the stage on Thursday. She studied while starring on the Disney Channel and on "Dancing With The Stars." She said walking across the stage meant a lot to her.

"It's really important for young people to see other young people striving to get their education," she said. "Both my parents are educators, so hopefully I inspire some kids out there my own age to go out there and keep doing it."