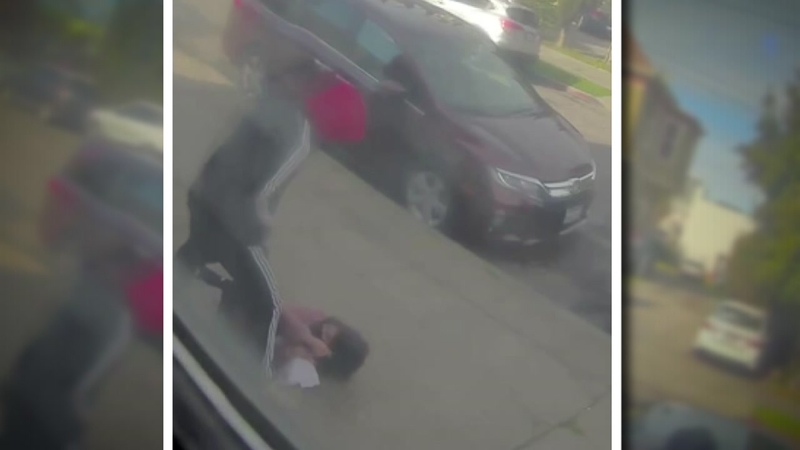 Oakland grandma attacked by 2 men after returning from bank

OAKLAND, Calif. -- Shocking video shows the moment an Oakland grandmother is knocked to the ground as she's coming home from the bank.

The video captured by her granddaughter comes on the heels of a series of attacks on seniors in Oakland's Chinatown neighborhood.

Actors Daniel Dae Kim and Daniel Wu are offering a $25,000 reward for information leading to an arrest of the man Oakland police say is responsible for shoving a 91-year old man to the ground in Chinatown.

Wanting to keep her identity private, the woman's granddaughter says the incident happened February 3 at around 11 a.m. in the area of 6th Avenue and International Boulevard in Oakland.

In the video one suspect can be seen quickly knocking the 70-year-old to the ground while another one runs in and steals her handbag. According to her granddaughter the suspects also tried to get her cell phone but luckily it along with cash from the bank was in her pocket and was not taken

The woman's granddaughter says she's already on edge after a 91-year-old man and two other seniors were attacked in Chinatown in recent weeks. She plans to file a police report and is hoping to raise awareness of crimes against seniors. She continued to say her grandma was bruised but is recovering from her traumatic experience.

ABC7's sister station KGO has reached out to Oakland Police about this incident.

The Oakland Chinatown Chamber of Commerce has reported that more than 20 assaults and robberies have occurred in nearby Chinatown in recent weeks. During a press conference on Feb. 3, Oakland Police Capt. Bobby Hookfin said the attacks in Chinatown "...appear to be more violent, for whatever reason and that's why we need to stop this now."
Report a correction or typo
Related topics:
northern californiacaliforniagrandmotherelderly womancrimeattackelderlyseniorswoman attackedcaught on videosenior citizenscaught on camera
Copyright © 2022 KGO-TV. All Rights Reserved.
TOP STORIES
LA County could hit 'high' COVID level in July, prompt return of masks
Here's what to know about the end of CA's eviction moratorium
California late start law aims to make school less of a yawn
LAX expected to be second busiest US airport over July 4th weekend
Woman searching for brother reported missing in Redondo Beach
Lawyer: Nipsey Hussle lifted up neighborhood he was gunned down in
Apple's newest CarPlay feature will make buying gas easier
Show More
How to save money when buying a new car in an inflated market
Orange County confirms 1st presumptive case of monkeypox
OC woman attacked and sexually battered inside Irvine storage facility
Silver Lake restaurant offers free food in exchange for Sriracha
USC, UCLA moving from Pac-12 to Big Ten in 2024
More TOP STORIES News