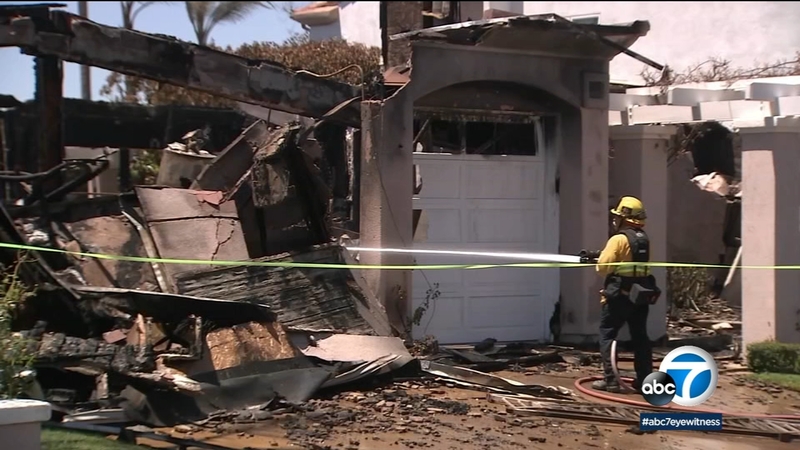 LAGUNA NIGUEL, Calif. (CNS) -- A 200-acre fire that devastated an upscale hilltop neighborhood in Laguna Niguel was 60% contained Saturday as authorities reduced the mandatory evacuation zone from 900 homes to 71 homes.

The Coastal Fire destroyed 20 homes and damaged 11 others since breaking out Wednesday afternoon, according to the Orange County Fire Agency. Two firefighters suffered minor injuries.

The agency said 456 firefighters were on the scene, with personnel using the heat-seeking capabilities of drones to seek out hot spots within the fire's perimeter.

Four streets in the impacted area remained under mandatory evacuation until further progress can be made, according to Laguna Niguel city officials. Those streets are Coronado Pointe, Vista Court, Via La Rosas and Vista Montemar (residences at 71, 72, 74, 76, 78, 80).

The fire broke out at 2:44 p.m. Wednesday near the South Orange County Wastewater Authority's Coastal Treatment Plant, embarking on a relentless wind- and terrain-driven march.

According to an update issued by the city, a total of 131 homes are now in the mandatory evacuation zone compared to the 900 that were reported earlier.

There was no immediate timeline on when the rest of the evacuations might be lifted. An evacuation center was established at the Laguna Niguel Community Center at 28751 Crown Valley Parkway.

Saturday's forecast called for a high of 82 degrees in Laguna Niguel, with winds of 8 mph.

But while firefighting efforts progressed, the damage was already done. Streets once lined with multimillion-dollar homes overlooking the Pacific Ocean were reduced to war-like scenes of rubble, evidencing a firefight that saw flames skipping from rooftop to rooftop as winds carried embers into the heart of the neighborhood.

The flames spread quickly as they tore through thick brush on the hillside, aided by ocean winds that sparked spot fires ahead of the main blaze. The fire pushed its way uphill, advancing on Aliso Summit Trail and into the neighboring multimillion-dollar estates.

The flames crested a hilltop and advanced into an exclusive neighborhood, swallowing homes along La Vue and Coronado Pointe near the Aliso Summit Trail. The flames advanced even as fixed-wing planes dropped fire retardant on the hillside in hopes of slowing the advance of the flames. Several water-dropping helicopters were also employed in the firefight.

OCFA Capt. Shane Sherwood said the relentless march of the blaze was caused by a combination of dry brush, fierce winds and the uphill terrain.

"When all three of those components come together, there is very little that the firefighting efforts can do," he said. "The biggest thing that we want to do is get the folks out of the way. That's where the evacuations come into place. And so that's unfortunately what we had...It was really those fuels being as dry as they were, the strong winds and the alignment on the topography is what created the devastation."

"We are very fortunate it is not more homes and we have no loss of life, which is fantastic and in our minds is success."

The cause of the fire remained under investigation, although Southern California Edison sent a letter to the state Public Utilities Commission reporting "circuit activity occurring close in time to the reported time" of the fire, but it was uncertain if it contributed to the start of the fire.

"We submitted an initial Electric Safety Incident Report to the California Public Utilities Commission. SCE is required to submit an ESIR to the CPUC on certain types of incidents," SCE spokesman David Song said. "Our information reflects circuit activity occurring close in time to the reported time of the fire...The submission of this report to the CPUC is intended to put them on notice of an incident so that it can conduct its own investigation."

Residents of a Laguna Niguel community evacuated during the Coastal Fire got a firsthand look at the destruction left behind, as one man gets reunited with a priceless photo saved from the flames.

SCE had personnel and investigators on the scene Thursday.

California secured a fire management assistance grant from the Federal Emergency Management Agency to ensure the availability of resources to battle the fire, Gov. Gavin Newsom said in a statement.

The grant is provided through funds from the federal disaster relief fund and enables local, state and tribal agencies responding to the fire to apply for 75% reimbursement of their eligible fire suppression costs.

Orange County also approved an emergency proclamation Thursday aimed at ensuring all available resources are available to fight the blaze.

"This emergency proclamation allows the county to fully deploy all available resources, actions, and measures deemed necessary to ensure the safety and welfare of Orange County residents and property," according to a statement from the county. "Assistance from other local agencies in the Southern California area is supplementing local resources."