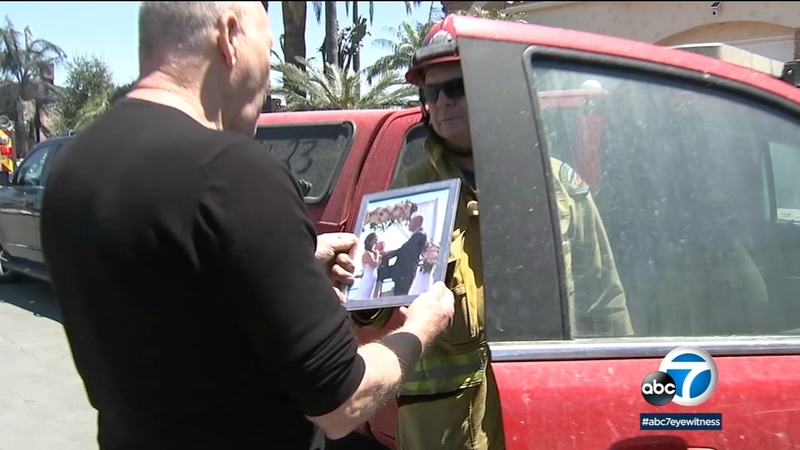 LAGUNA NIGUEL, Calif. (KABC) -- Residents of a Laguna Niguel community evacuated during the Coastal Fire got a firsthand look at the destruction left behind on Thursday.

The charred skeletons of what were once family homes are all that remain after a wind-driven wildfire.

Keith Morey is one of those residents whose home was destroyed in the fire.

Morey and his wife were reunited with a priceless wedding photo, thanks to Orange County Fire Authority Captain William Lackey who saved it from the flames.

"Oh thank you! Thank you so much," a grateful Morey said as he hugged the fire captain.

Capt. Lackey said the priceless memory would have otherwise turned to ash.

"Well it's a great feeling. It really is. It is a small reward in a really devastating day," Capt. Lackey said.

Morey's wife, Lynn Morey, said they always have to look at the silver lining, as she held on to the wedding photo.

"Every day in life can bring us tragedy but we always look at how we can get through this and what's our higher purpose for this," Lynn said. "That's how we live our life every day."

At least 20 homes in Laguna Niguel were destroyed by a brush fire that spread rapidly amid strong winds, and crews continued to fight the flames on Thursday.

Now, as the shock begins to wear off, residents are faced with figuring out their next steps.

The Coastal Fire, as officials are calling it, exploded Wednesday afternoon, and at least 20 homes were destroyed in that fast-moving wildfire.

The Red Cross says that at least 21 people took advantage of an evacuation shelter nearby. People there say they only had minutes to grab their most important belongings like pictures and other irreplaceable things.

"So I started getting really scared so I thought what to take. You don't know what to take," said Darlene Disebrucker, who evacuated during the fire. "So I grabbed my laptop, my iPad, some jewelry and framed pictures."

On Thursday, fire officials said that about 900 homes remain evacuated. Residents believe without the quick response of firefighters the entire neighborhood would have burned to the ground.

"We want to thank the citizens of the community with their rapid evacuations," said OCFA Assistant Fire Chief TJ McGovern. "We made the evacuation order and they immediately responded to that order, got out of harm's way, which allowed us to get our resources in there and start engaging in the firefight."

Fire crews are still out here working to put out water on hot spots, so it may be some time before those evacuation orders are lifted and people can return home.

One firefighter was hurt in this blaze. Officials say he was checked and taken to the hospital. Fortunately, no other injuries have been reported.