Someone yelled "Shut up" and fired several metal pellets at an Orange County preschool campus that was having a summer send-off, injuring a teacher.
KABC
By ABC7.com staff 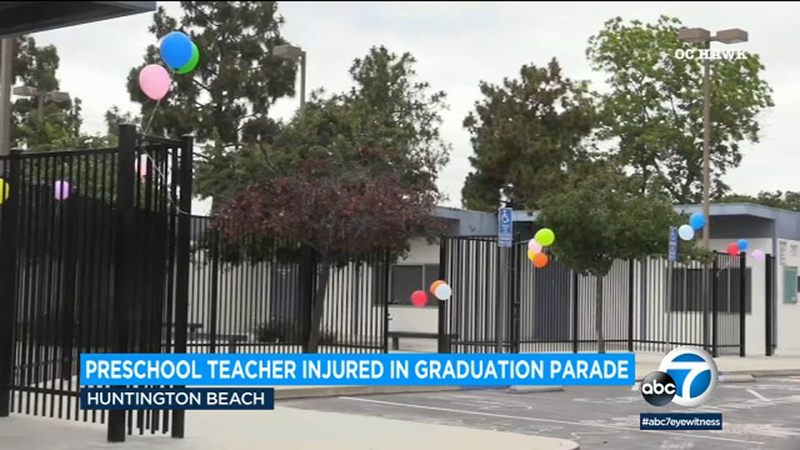 HUNTINGTON BEACH, Calif. (KABC) -- An end-of-school-year celebration at an Orange County preschool was marred when someone shot a teacher with a pellet gun, authorities say.

Staff, parents and children of Oak View Preschool in Huntington Beach were holding a drive-thru parade in the neighborhood to hold a summer send-off for the students. Some teachers were wearing costumes and parents were honking horns as they drove by celebrating after such an unusual and challenging school year.

Around 11:30 a.m., someone drove by the school, was heard yelling "shut up" and then apparently fired several pellets toward the campus. Staff members recalled hearing metal pinging sounds as the pellets hit metal railings.

Then a pellet struck a teacher in the upper leg, causing a wound that bled.

Staff members went into lockdown mode, calling 911 and shutting the gates of the school, she said.

The teacher who was struck was brought to a local hospital.

The person who fired the pellet has not been located, but Huntington Beach police confirm they are investigating the incident.

The president of the school board asked members of the public to send in any video they may have taken during the parade at the time of the shooting.

Video and other information can be emailed to the district office at clee@ovsd.org

Someone yelled "Shut up" and fired several metal pellets at an Orange County preschool campus that was having a summer send-off, injuring a teacher.

"It was a really nice event that unfortunately turned really dark," said Gina Clayton-Tarvin, board president of Ocean View School District. "It's really sad for us. It's sad for the community here in Huntington Beach to have something like this here go on."

"As the president of the school district, as a parent in this school district, as a human being, it's disturbing to me," she added. "We have people coming together in celebration for the end of the year. It's been a really hard year because of the pandemic and the kids not being in school with us and all of that trauma for the children. And this on top of it? I mean, why? This is disturbing. It's completely disturbing."
Report a correction or typo
Related topics:
huntington beachorange countyschool shootingteacherbb gunpellet gun
Copyright © 2022 KABC Television, LLC. All rights reserved.
TOP STORIES
Nurse dies days after being attacked at DTLA bus stop
SoCal coastal areas see damage from tsunami surge
Expect more worrisome COVID variants after omicron, scientists say
Tuskegee Airman Brig. Gen. Charles McGee dies at 102
FBI identifies hostage-taker at Texas synagogue
Lori Loughlin, Mossimo Giannulli's Hidden Hills home burglarized
Legendary KABC Radio host Michael Jackson dies at 87
Show More
LA County reports 53 new COVID deaths, 43,883 more cases
Police increase patrols near synagogues in LA and Beverly Hills
Man fatally stabbed while breaking up fight in Koreatown
Wis. hunters set tangled bucks free instead of killing them: VIDEO
LAUSD superintendent: Safest place for students to learn is on campus
More TOP STORIES News