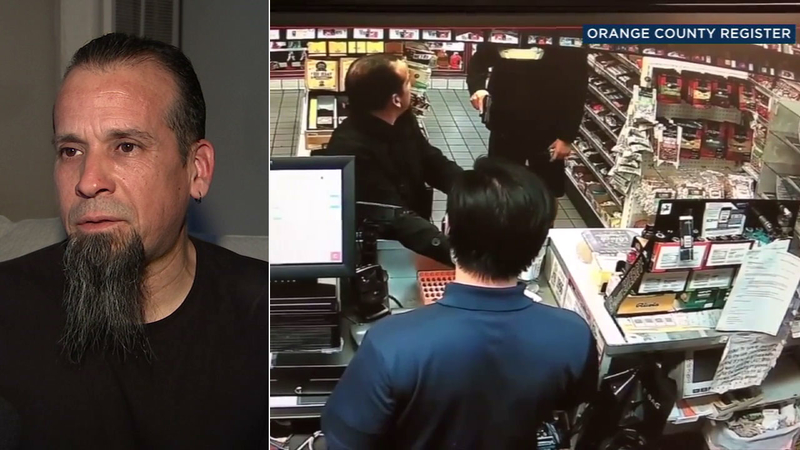 BUENA PARK, Calif. (KABC) -- Jose Arreola cannot understand why an off-duty Buena Park officer pulled a gun on him at a Chevron gas station in mid-March.

He was at the counter, buying a pack of Mentos for his wife when the officer, seen in plain clothes on surveillance video, stepped in.

In the video, he sees Arreola putting the purchased Mentos into his coat pocket. He then says, "Hey, give that back. I'm a police officer."

Arreola turned around in the video and appeared shocked as the officer then reached into his pocket and pulled out his gun. Arreola told the officer repeatedly that he paid for the Mentos, but the officer continued pointing his gun and told Arreola to put them back, get his change and leave.

"How can you do that, you know? Pull a gun over a candy," Arreola said. "He looked at me and right away he thought I was a thief (that) I'm stealing it, and nothing I said convinced him."

Arreola complied with the orders even though he wasn't sure if the man was actually an officer.

"All I could think about was my wife. For a moment (I) was (thinking) this guy's going to shoot me because even in the video you see that he cocked the gun," he said.

The tense confrontation ended when the clerk told the officer twice that Arreola paid for the candy.

Arreola's wife, who was outside in the car during the incident, said her husband was angry when he returned.

Arreola said he is frustrated by the police department's handling of the situation, and in response has hired an attorney.

"I wanted an apology and I simply wanted them to take responsibility," he said.