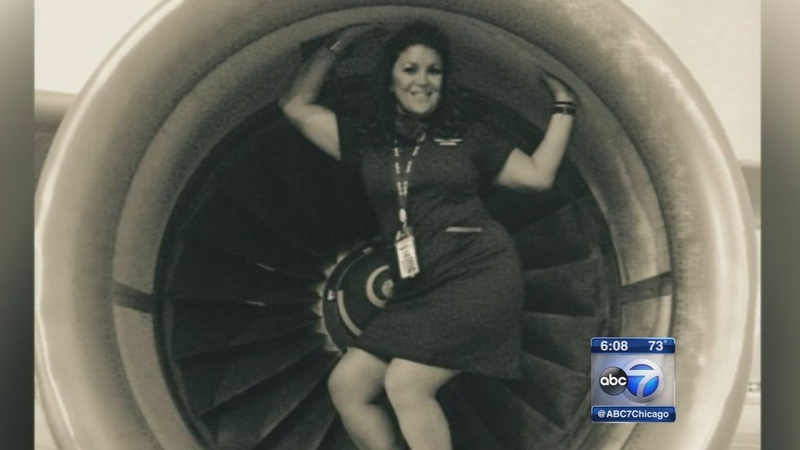 CHICAGO -- A Chicago flight attendant for Spirit Airlines is in trouble for some photos taken on the tarmac at Chicago O'Hare International Airport.

Some passengers who had just boarded a Spirit Airline plane at O'Hare looked out the window and saw a flight attendant posing inside the jet engine well. One of the passengers contacted the Eyewitness News in disbelief, asking if it was part of a new pre-flight checklist. When this flight attendant ended up working their flight, they took down her name and later found she had posted the pictures on her Facebook page.

Some passengers witnessed the flight attendant standing on the tarmac in front of one of the plane's jet engines and then scrunched in front of the turbine blades.

One person who contacted Eyewitness News said they couldn't believe what they were seeing and questioned whether it was proper and legal.

They wrote down the name of the Spirit flight attendant, Ericka Paige Diehl, and looked her up on Facebook, where the tarmac photos were posted. One of them was being used as her profile picture.

When Eyewitness News contacted her Tuesday, the 41-year-old Gurnee resident said at first that she didn't know anything about the photos on her Facebook page, and then said she wasn't "at liberty to discuss them."

A few minutes later, however, the pictures vanished from Facebook and are now replaced by an inspirational message that says, "Your wings already exist, all you have to do is fly." Tonight her Facebook page has been taken down altogether.

This afternoon a Spirit Airlines executive did discuss the photos with Eyewitness News, stating that "the activity portrayed in the photo absolutely goes against Spirit policy."

Spirit spokesman Paul Berry said the airline will be investigating further and will take appropriate action.

After the flight took off from O'Hare, the concerned passenger asked that flight attendant what she was doing around the engines and her reply was "taking a picture." It may end up a picture to remember.

A spokesperson for the Chicago Department of Aviation says, "in order to access the tarmac, an individual must be properly badged and/or under escort."

It isn't clear whether Diehl or those taking the picture were authorized to be there and she hung up on the Eyewitness News before that could be clarified. Prior to the photos disappearing from her Facebook page, however, in an exchange with friends Diehl did comment that the pictures could probably get her fired.
Related topics:
illinoisfacebookohare airportairline
Copyright © 2022 WLS-TV. All Rights Reserved.
TOP STORIES
1 killed in fiery multi-vehicle crash on 105 Freeway in Paramount
Nurse dies days after being attacked at DTLA bus stop
SoCal coastal areas see damage from tsunami surge
3 people killed after car flies off 210 Freeway in Pasadena
18K ancient Saudi Arabian tombs discovered along 4,500-year-old road
Expect more worrisome COVID variants after omicron, scientists say
Legendary KABC Radio host Michael Jackson dies at 87
Show More
Celebrated Tuskegee Airman Charles McGee dies at 102
Lori Loughlin, Mossimo Giannulli's Hidden Hills home burglarized
FBI identifies hostage-taker at Texas synagogue
LA County reports 53 new COVID deaths, 43,883 more cases
Police increase patrols near synagogues in LA and Beverly Hills
More TOP STORIES News