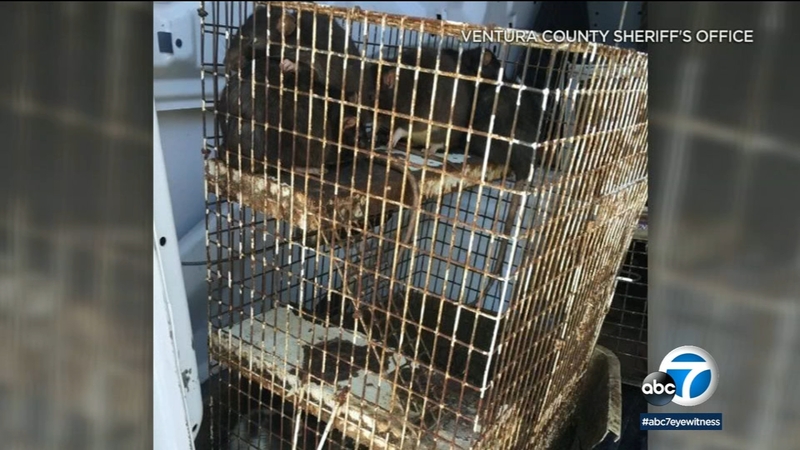 OJAI, Calif. (KABC) -- Authorities have released the first photos of a trash-strewn house where up to 700 rats were believed to be living with the elderly father and sister of a woman who was arrested for elder abuse.

After discovering the filthy conditions in the home, authorities arrested Catherine Ann Vandermaesen for elder abuse and failure to care for animals.

Investigators say her 74-year-old sister and her 96-year-old father were living in the home under her care.

A woman was arrested for alleged elder and animal abuse after authorities said they believe up to 700 rats were living inside the Ojai home where the suspect's elderly father and sister lived.

In one bedroom, a bed is piled with trash, old newspapers and empty vodka bottles and the blankets are stained. Photos of the floors similarly show crumbs and dirt scattered on the carpet next to a broom.

Authorities have released the first photos of a trash-strewn Ojai house where up to 700 rats were believed to be living with an elderly man and his daughter.

Officials say before they even entered the home, they detected a powerful smell of urine from 20 feet outside.

Once they went inside, they found excessive animal fecal and urine matter. The occupants also had urine and fecal stains on their clothing.
Animal control and humane society officers found and removed 12 dogs, two rabbits, one cat, one African Grey parrot and 55 wild rats.

They also estimated there were another 200 to 700 wild rats still loose and living within the two-bedroom home, walls, garage and garbage.

The two sisters and their father were living in the front living room with the 12 dogs, detectives said.

The city of Ojai has yellow-tagged the home - meaning no one can live there, although people are allowed inside briefly to retrieve personal items.

The suspect's father and sister were given medical treatment and assistance from Ventura County Adult Protection Services.