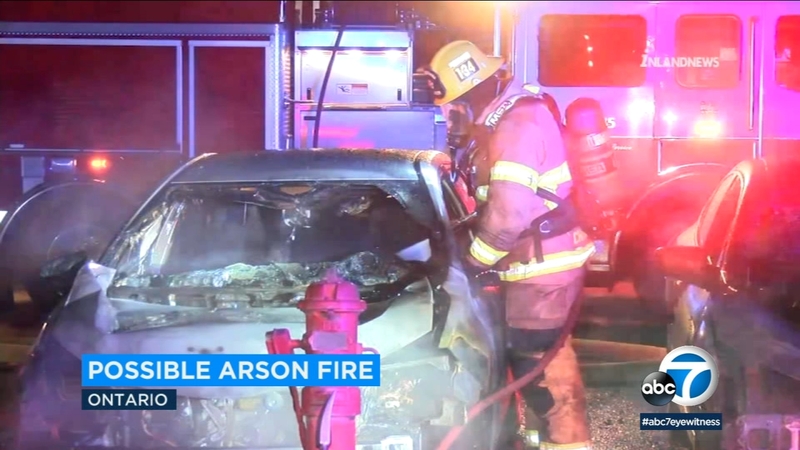 ONTARIO, Calif. (KABC) -- At least seven vehicles were damaged in a possible arson fire that erupted in the parking lot of Azure Hotel & Suites in Ontario early Sunday morning.

Authorities said shortly before 2 a.m. a blaze was reported in the 200 block of North Vineyard Avenue. The hotel was evacuated as a precaution.

Witness Hank Lugan, who was one of the people evacuated from the hotel, described the scene he saw when he walked out.

"All of the sudden, alarms went off and we're like what's going on? So we go outside and all of the sudden there's flames everywhere on three of these cars. It was insane...one of the people we actually know - one of their cars is completely melted," he said.

Authorities said one vehicle caught fire and spread to the other nearby cars. That main vehicle was towed away as part of the investigation, and cars that were near it were partially melted and charred.

The night manager told Eyewitness News that surveillance video he looked at showed a man walk up to the main vehicle, pour two cans of gasoline all over it and then he flicked a match on it. The manager said the match didn't start the fire, so the man in the video then pulled out his lighter to set the vehicle ablaze.

Authorities are reviewing the video as the investigation continues.