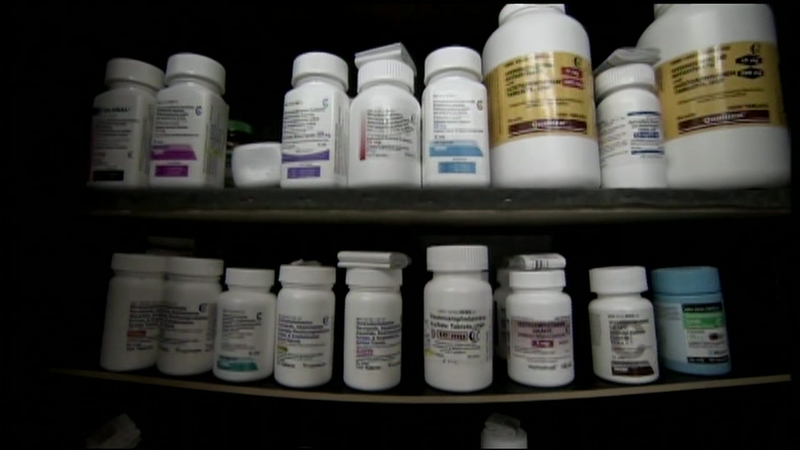 LOS ANGELES (KABC) -- Alex Gertsch had a tremendous amount of love for snowboarding, music and especially for his family. But this past summer, he lost his life to a drug overdose.

Kai Stone knew his cousin had a problem, but Gertsch fought hard against the ugly grasp of addiction.

He spent months in rehab, had a constant focus on fitness and tried to stay clean.

"He was sober for quite a long time," Stone said. "Right up until he left us."

The autopsy said he died from acute fentanyl toxicity. Fentanyl is the reason the country's drug problem is deadlier than it's ever been.

"About 72,000 per year die of overdose deaths," said David Downing, head of the Drug Enforcement Administration in Los Angeles. "That equates to roughly 200 folks per day."

Downing's job is to stop the wave of addiction and death from drugs. It's devastated the East Coast and is making its way here.

"We're working to curve this problem before it happens," Downing said. "We're nowhere near them. Yet, it's still an issue. It's a problem we have to keep our eyes on. We have to attack it. "

"I don't need very much for my analysis. The tip of that will give me enough material that I could then dissolve in my solution," Dean said.

Fentanyl was first developed in the 1960s as a potent painkiller for patients suffering from terminal cancer.

Today, a drug trafficker can purchase a kilo from a Chinese lab for as little as $5,000, and then use it to make counterfeit pills.

"What we often find is these often contain fentanyl. If you consider two milligrams as potentially a lethal dose, these are very close to that end of the scale," Dean said.

A small brick can be used to make hundreds of thousands of pills. It can also be mixed with heroin or cocaine, and because so little is needed, the profits are in the millions.

Just touching fentanyl or even breathing it can kill you.

That's why Kirby has to wear a hazmat suit when a lab is busted.

"You're fully protected from any kind of chemical splash," Kirby said.

He wore it for a bust in Los Angeles where pill presses and even the stamps to make the pills look legitimate were found.

The pills appear so real, the person using them thinks they are taking a regular painkiller, but it is actually fentanyl.

It begs the question: What did Gertsch take?

His phone has the answer.

"You in stock with the roofing tar?" reads a text message Gertsch sent.

Stixx said he's all out, but he does have "China white."

"Best stuff in LA guaranteed or your money back," Stixx replied.

In the past, "China white" was a purer form of heroin, but today, it's often heroin laced with fentanyl.

They met up in West Hollywood. Soon after, Gertsch was dead.

"I don't think he knew that it was fentanyl, and how strong it was going to be," Stone said.

Who is Stixx and how many people has he done this to?

A special task force called Fusion put together by Downing and the DEA is a new weapon taking drugs and drug dealers off the streets.

Thanks to Fusion, we now know Stixx is believed to be 25-year-old Andrew Joseph Madi. He was arrested last week and appeared in court this week.

Gertsch's heartbroken-but-courageous parents were there to look him in the eye, and see the person they believe killed their son.

If convicted, Madi faces a minimum of 20 years in prison because of tougher new penalties.

Eyewitness News received exclusive access to how the Fusion task force works on the inside.

Part two of an Eyewitness News exclusive goes for an inside look into the anti-drug task force set up to combat the opioid epidemic in Los Angeles.

The DEA is teaming up with the LAPD, Los Angeles County Sheriff's Department and a host of other agencies, pooling their resources and expertise.

In a middle class neighborhood in Los Angeles a house is surrounded by crime tape. A young man had lost his life to drugs inside.

It's happened a record 72,000 times last year in the United States and Los Angeles is a big part of the problem.

"Drug cartels send their stuff to LA, where it's distributed across the nation," DEA agent Bob Thomas said.

During a "buy walk" with the task force, drugs are bought from a dealer, but the dealer isn't arrested.

"Usually when we identify a street dealer, our goal is to focus on the organization that he is a part of," Thomas said.

The end result of the sting operation is a small packet of pills. Thomas uses a laser to give a preliminary reading on its contents. The pills are "Molly," sometimes called ecstasy - although here's no way to know for sure until it's tested.

There are many kinds of drugs, but opioids have made the crisis catastrophic.

Kirby said it starts with a legitimate prescription for a painkiller like OxyContin, but the patient gets addicted and turns to the streets for help.

"I have never met a heroin addict that wasn't first addicted to opioids," Downing said. "It's a cycle."

Perhaps you will find Xanax or Vicodin on the streets, but you won't know if they are fake, and they may contain fentanyl. If the pills are off just a fraction, it becomes fatal.

U.S. attorney Nick Hanna said the problem must be stopped where it starts: the doctors. Some are carelessly overprescribing - and worse.

"Then there are others who are straight criminals and are selling prescriptions to all comers," Hanna said. "They are not doing examinations, they are just writing prescriptions."

Hanna said whether it's the doctor, the pusher or the cartel, the Fusion task force is going after them, with new tougher laws.

"We have some very powerful federal tools, including a 20-years mandatory minimum that applies to anyone who sells drugs that results in death," Hanna said.

Back at the middle-class house, the victim's family says he wasn't an addict. He had a toothache and sought relief.

It is not known what happened, but there's an obligation to his grieving family to find out.